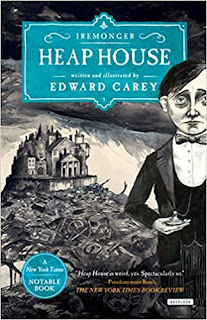 This is one of the strangest, most bizarre middle grade/YA books I have ever read in my entire life.  I picked it up on a whim from the donation table, and it looked like a proper read for RIP, but I was not expecting the complete outlandishness of this story.  I'm not even sure how to describe it.

In an alternate Victorian London, the Iremonger family rules the realm of trash.  They're bailiffs (in US terms, repo men) and they also do salvage.  Over the last hundred years or so, they've amassed miles of land near London, all of which is covered by the heaps (of trash).  Their mansion stands in the middle of the heaps, and is a conglomeration of an incredible number of buildings they've repossessed and fastened on.  The people of an entire town work in the heaps, searching for goods to be salvaged, but the heaps are very dangerous -- they even have their own weather.

Young Clod Iremonger is one of many Iremongers all living in the gigantic house.  They are expected to marry one another and carry on the proud tradition.  Each Iremonger is given a birth object, which they must have with them at all times (Clod's is a bath plug), but Clod has a strange talent: he can hear the objects speak.  There's also a girl, Lucy, who is brought in to be a servant.  She's stubbornly determined to stay herself and not melt in with the others, who seem to have forgotten their names.   Against the rules, they become friends and allies, and start to discover the terrible secrets of Heap House.

The writing style is odd, with long, involved sentences that use lists and synonyms to create an atmosphere.   The book feels crowded with stuff and with filth, just like the house.  There is a lot of strange wordplay, too -- for one thing, Iremongers' names are twisted versions of ordinary names.

The Iremongers are the ultimate hoarders, and the dirt is unconquerable.  The house is filled not only with people, but with critters.  And truly bizarre things happen -- people and objects trade places, and everything is very isolated and closed-off.  Only a few Iremongers ever leave the house, and the family treats things like people, and people like things.

Carey has obviously read Gorey -- from the first sentence, I thought he was doing callbacks to titles like The Helpless Doorknob.  I suppose if your name is Edward Carey and you like to write and draw the macabre, you'd have to hang a lampshade on it.  I also suspected him of reading Diana Wynne Jones, and indeed in this interview he puts her at the front of a list of "absolutely inspiring" modern children's writers.   Her first published children's book, Wilkin's Tooth/Witch's Business, features a witch named Biddy Iremonger, and Iremonger is indeed a wonderful name for a family of miserable hoarders.

I didn't really like this story, though.  It wasn't pleasant in any way, except that Clod and Lucy start to become friends.  I don't really want to read the other books and find out what happens, and I don't want to read any more about cockroaches and rats either.  Even the bats are not fun.