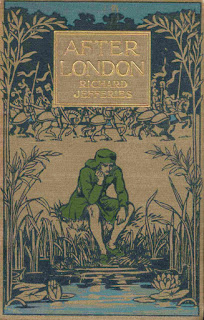 After London, or, Wild England, by Richard Jefferies

I've been reading this forever on my phone.  (Since I hardly ever read on my phone, it took a long time!  But it was nice to have a 'phone book.')  My brother recommended it to me and he was right; it was a very interesting thing to read.

Jefferies published his story in 1885.  People would have thought of it as romance at the time, as in an improbable adventure.  We'd call it something like post-eco-apocalypse; the story is set hundreds of years in the future, long after some mysterious disaster has killed most of the population of England and presumably the rest of the world.  Water levels have risen, and the formerly great cities are submerged, exuding unknown poisons into the water.  The Thames Valley is now a gigantic lake, and petty kings exert power over small, feudal populations (the story is pretty much confined to the Thames Valley and maybe a bit north).

The first part of the novel is a 'history' written by a monk, describing what is known of the disaster and its aftereffects -- everything has become overgrown, the forest has returned, and while there are many animals, there are few people.  Jefferies was mostly a nature writer, and he's pretty happy to describe a beautiful, back-to-the-wild England.

The second, larger part is the story of Felix of the Aquila family; his father is a king, but an extremely minor one, and nobody is very impressed with Felix, who is good with his bow but otherwise a bookish dreamy type -- only there are hardly any books.  Oliver, the older son, is the popular one.  Felix is in love with the daughter of a much more prominent king (who loves him back!) but his chances for winning her father's approval are dismal.  Therefore Felix decides to build a small boat and explore the great waters -- maybe he can win his fortune and come back in triumph to claim Aurora.

Felix observes a lot of nature, experiences war in another society, and dreams of establishing his own fort.  He's clever, and a good site never fails to set him planning.  He finds London -- what's left of it -- and those chapters are bizarre and surreal, very apocalyptic indeed.  Like Roadside Picnic.

It's an odd, experimental novel, and it stops short with Felix still in the middle of his adventure.  I want a sequel!  I loved all the details of life in this strange world, where glass and porcelain are highly prized because nobody can make them any more, and having a glass window is a mark of enormous wealth.  It seems strange to me that the characters have Latin names -- you'd think the kings would bear the proud and ancient names of Robinson and Jones -- but Jefferies, being a Victorian, seems to have felt it natural for people to use Latin as a mark of royalty.

I really, really wish there was a map of this future England and Felix's journey.  But I don't know if Jefferies was being that exact.

Very interesting read for fans of early speculative fiction -- and it turns out that William Morris loved it and it was part of the inspiration for News From Nowhere, so I guess I'd better read that soon.  (It's not like Jefferies describes a Fabian utopia.  Life for humans is nasty, brutish, and short.  It must have been the nature part Morris liked.)