Summerbook #19: The Anvil of the World

The Anvil of the World, by Kage Baker 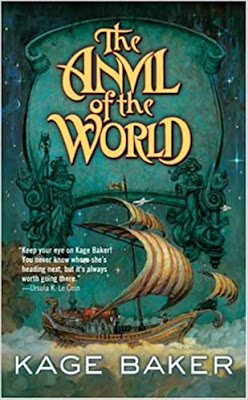 #20booksofsummer note: I guess I'm a day late and a dollar short, but no worries.  I finished this on September 1, and The Golden Bough is book #20, so I'm calling it good!

I have really loved Kage Baker's Company series, and this was her first dive into fantasy instead of SF.  (Do you know, she only published for about 13 years before she died too young in 2010?  She produced an incredible number of books in that time!)

Smith just wants a quiet life and a steady job that doesn't involve killing people -- which is his major talent.  He takes a job leading a caravan from the breadbasket city of Troon to the sea port Salish, carrying lots of cargo, several odd passengers, and a good crew.  After the caravan is attacked three times, Smith figures something might be up with these passengers...

The world has several species: Smith is of the Children of the Sun, a prolific people given to building, blood feuds, and a total lack of thought for the environment.  Then there are the pacifist, forest-dwelling Yendri, and the two races don't get along that well.  Also there are demons!

Baker packs a stunning amount of plot into a 350-page story.  I thought we were setting up for a trilogy, but she gets a trilogy-worth into one volume.  There are other stories set on the same world, though, so I'd like to get hold of The House of the Stag next, which features the history of the Yendri.

This novel is quite a lot of fun.  It doesn't take itself very seriously -- though there are some heavy moments too -- and it was a nice relaxing read, great for a summer escape from all the mess that is the world right now.