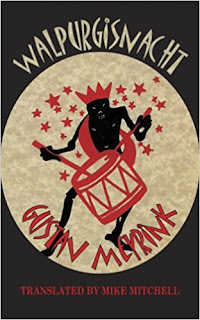 I saved this book to read over actual Walpurgisnacht, which is April 30.  The novel starts at that point and then continues for a couple of months, except that time is also stalled; the characters can't get past it.  Meyrink wrote Walpurgisnacht in 1917, and it continues the train of thought he was following in his prior novel, The Green Face, which I haven't read yet.  I guess I got it a little bit out of order.

The story is set in Prague, during World War I.  German officials and aristocrats live in a sort of palace/office complex and virtually never leave; certainly they never, ever cross the river to the ordinary people of Prague.  The river (Moldau then, now Vltava) is a nearly uncrossable barrier.  These aristocrats are few, elderly, decrepit, and senile, with the exception of the young and voracious Polyxena.  She is carrying on an affair with Ottokar, a poor violinist.

The actor Zrcadlo (Mirror) appears at the palace; he might be dead, or possessed, or just strange, but he has a talent for changing his appearance.  He may be reflecting your soul back at you, or he might be a conduit of communication with far-off magicians.  As Ottokar gets involved with violent revolutionaries (who have few goals besides revolt), Polyxena discovers an occult talent for possession and uses Zrcadlo to influence the mob.  They crown Ottokar king -- but not for long.

Like Meyrink's most famous novel, The Golem, this is a very strange novel, with comic and grotesque elements. It presents the rulers of European empires and tells us that these empires are dying, about to fall, and that they deserve to do so.*  It presents the populace as different, but no better; they are violent, ignorant, and eager to seize power themselves so as to become the oppressors.  Nobody is benevolent, certainly not Polyxena or Ottokar.  And all of that is mixed up with a large dose of Meyrink's bizarre imaginings, and his obsession with, and hatred for, Prague.


Furious, he chewed at his fingernails, surreptitiously observing the others from beneath his eyebrows, to see what attitude they would take.  Discord was the last thing he wanted at the moment; above all, he had to keep the reins firmly in his grasp.  He was determined to lead a movement, what banner it went under was unimportant.  He had never in his life believed it would be possible to put nihilist theories into practice, he was much too intelligent for that.  He left that kind of nonsense to dreamers and fools.  But to whip a stupid crowd into a frenzy with anarchist slogans and in the ensuing confusion secure some position of power for himself -- to sit for once inside the carriage instead of on the box -- that, he realised, was the message behind all the anarchists' teachings.  The secret slogan of the anarchists, "You get out of the way and let me in," had long been his, too.

"What does the fellow want?" he asked aloud.
"Don't know," was the laconic reply.
"What does he look like?"
"Different every day, if it please your Honour."
"What on earth does that mean?"
"Well, Stefan Brabetz changes his clothes every five minutes.  So that no one will know it's him."
Halberd thought for a while.  "All right, let him in."

He was filled with content at the presentiment that the Walpurgisnacht of life was soon to give way to a day more radiant than anything he had experienced during his life...


Nobody could call Meyrink easy to read, but he's certainly interesting.  I plan to read The Green Face too, hopefully sometime soon -- but there are so many books to read...


*Looking at the situation from the other end of a century or so of even more violence than the empires managed to accomplish, it's much easier to note that they had their good points.
Germanic literature