Libraries in the Ancient World 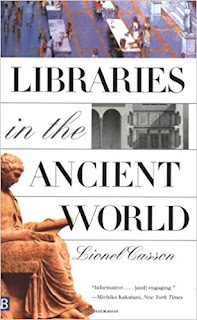 Libraries in the Ancient World, by Lionel Casson

My mom gave this neat book to me several years ago, and I hadn't gotten around to reading it.  I kind of thought I knew plenty about ancient libraries; after all, I took a history course in library school!  Well, I probably forgot all about whatever I learned in that, and this book is a nice informative and fun read.

Casson starts off with ancient Mesopotamia.  We probably usually think of Ashurbanipal as the first well-known king with a library, but he definitely wasn't the first Mesopotamian king to have one.  We know of two large libraries earlier, one of which belonged to Tiglath-Pileser I.  Ashurbanipal did have a really great library, though, and Casson also talks about how the Assyrians identified the tablets and cataloged them.

The Greeks also had libraries and cataloging methods!  They mostly went in for personal collections that they shared around with friends.  Then the Library of Alexandria was built especially to keep scholars around, but the Romans actually invented public libraries that were open to, apparently, just about anybody.  They put libraries in the public baths, even.  While the Greeks liked to keep their books in small rooms full of shelving and then take the scrolls out to a colonnade to read them, the Romans built reading rooms that looked like our idea of a public library, with shelving and nooks along the walls and large reading tables in the middle of the room.  Roman libraries were usually double-barrelled, with a selection of Greek classics in one room and Latin in the other.

Libraries even spread around the Roman Empire, not just in Rome itself.  And gradually, the Romans started using codices -- bound books like ours -- along with scrolls.  Codices were convenient to carry and easy to store and label, and Christians liked them in particular, so they spread quickly.

Casson ends with the fall of Rome, the loss of libraries in the chaos, and their preservation within monasteries in the beginnings of the Middle Ages.  It's a fairly quick read and quite fun, so I recommend it to library nerds everywhere.
books history TBR challenge