Fire in the Bones 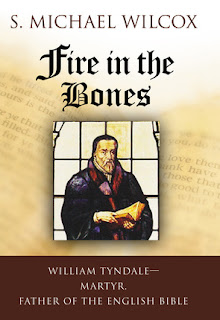 Fire in the Bones: William Tyndale -- Martyr, Father of the English Bible, by S. Michael Wilcox

It's a biography of William Tyndale, the great translator of the Bible into English!  I had this recommended to me a few years ago and it's been on my TBR shelf ever since.  It's written from an LDS perspective, and would not really be of interest to others.  Plus, Wilcox's tone is frankly kind of adulatory, which feels a little odd if you're more used to biographies that aim for a semblance of objectivity.

Wilcox puts a lot of historical background into the book, assuming that the average reader won't necessarily be all that familiar with late medieval and Reformation-era figures.  So Wycliffe and the Lollards get an introduction before Tyndale does, and Wilcox makes sure to explain who the various players are, especially Cromwell and More.  And boy is he partisan; he shows a grudging respect for Sir Thomas More as a famous humanist, martyred for his faith, but on the whole Wilcox is solidly on the Reformation side and doesn't like More one bit.

It's a detailed, interesting biography of Tyndale, though, which follows him through all his difficult moves around Germany and the Netherlands.  There is also plenty of space given to the details of translation and the phrases Tyndale coined that have become English idioms, which is a lot of fun.  Wilcox considers Tyndale's translation to be one of the great accomplishments of the age, and the King James Bible (which used a good deal of that translation) to be the greatest work of English literature, with only Shakespeare in competition.

I enjoyed reading this biography, and I've been planning for a long time to follow up with one of Tyndale's own works, The Obedience of a Christian Man, to get a better idea of what he was really like.  This is a nice book, but Wilcox is so enthusiastically and completely a Tyndale fan that it comes off as rather one-sided.