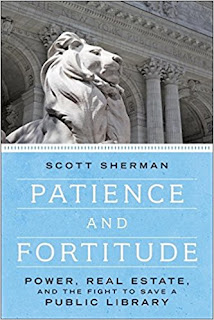 Patience and Fortitude: Power, Real Estate, and the Fight to Save a Public Library, by Scott Sherman

Let's talk about the New York Public Library!  You know the one, it's in a lot of movies, with the lions out front.  That is the 42nd Street main building, but the NYPL also has a whole lot of branch libraries.  The only one I've been to is the Greenwich Village branch, which looks like a red-brick castle.  Anyway, here is an interesting fact: the NYPL is not exactly a "public" library in the usual sense; it is not owned and operated by the City of New York.  It's a private non-profit which is governed by a board of trustees.  It gets some city money for salaries, but much of its funding has to be raised privately and put into an endowment, which is controlled by the trustees, who are usually prominent, wealthy NYC people.  And the funding wasn't doing too well in the 1960s and 70s, and in the early 2000s it was pretty dire.  Branches needed major repairs, collections were slipping, it was all very depressing.

Patience and Fortitude is about the trustees of the NYPL getting a little bit off-track.  They're entrusted with running a huge, complex system, part of which involves popular daily services, and part of which involves deep research collections available to all (unlike most research collections!).  But the trustees at this time were enamored of imitating corporations like, say, Netflix or FedEx, and wanted to slim down and find more money.  They developed a plan to "monetize non-core assets" -- that is, sell library branches for the real estate value -- and also do a grand renovation of the 42nd St. building for huge amounts of money, and also move most of the 42nd St. book collections off-site to be stored in New Jersey.  Patrons would have to order books and wait for delivery.  This would be fine, because the future is all ebooks anyway, and it would all be computers and book scans.  Somehow, the renovation (costing $300 million) would result in $15 million of yearly revenue.  At the same time, specialized research librarians who curated some amazing collections were let go, as the city kept cutting budgets.

All this planning was being done on the quiet, and it was about to all happen, but the 2008 recession interrupted the project.  A few years later, it was revived, but this time word got out more quickly.  Protest and controversy erupted.  Each side accused the other of elitism.  Architects pointed out that the proposal to tear the multi-storied steel stacks out of the library would be really quite a serious problem, especially since the floor of the reading room is supported by those stacks.  Arguments went back and forth, until the whole thing finally fizzled.  Trustees agreed not to sell the Mid-Manhattan branch, but to overhaul it instead.  The stacks would stay, but they had already been emptied.  And the Donnell Library, home to a beautiful world languages collection, was gone, sold for cheap to a real-estate developer who promised to put a smaller library into the basement of the new tower to be built there.

The ending of this book is sort of happy, in that the stacks and the Mid-Manhattan library survived.  I found it mostly sad, though.  The stacks still stand empty, their contents apparently stashed in various warehouses, with some of it just unknown or lost.  The Donnell Library's replacement did open, but it's not quite the same.  The Mid-Manahattan Library is finally actually being renovated and is not open yet.

The NYPL is planning a new giant renovation of the 42nd St. building, though this time it promises to leave the stacks alone.  I'd hope they'd overhaul the air system down there so the books can be put back where they belong; I don't know where those books are, but I bet they're not in proper storage facilities.

I found reading this book to be a stressful experience!  I kept feeling all this dread and my stomach would twist into knots.  I did not enjoy reading about the decline of the world-class Slavic collection.  I wish people would stop thinking that libraries should be like Netflix.  Netflix should be like Netflix, but libraries should not.  This was popular thinking when I was in library school, too, and I remember one large city library boasting that it was all about popularity, and it had stringent standards for keeping books; if a book didn't circulate 7 times a year, it was out.  Aigh!  This is not to say that weeding is not an important part of collection development; it is.  But you have to take into account the purpose of the collection, and the needs of people whose tastes may not run to James Patterson.

Appreciate your friendly neighborhood public library today, folks.  And if you're in New York, drop by a branch and tell the beleaguered librarians hello for me.  Maybe give Patience a pat.


Oh, and I did want to share with you this nice bit of writing by William Zinsser from 1961 about the NYPL and "the quality of freedom":

This is a building that takes no sides because is presents all sides.  It grants its visitors the dignity of free access to information.  It does not hide the ugly or censor the injurious.  These guarantees are woven through every division, and often they take extraordinary form.