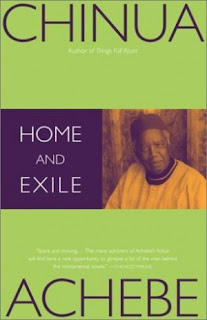 Home and Exile, by Chinua Achebe

If a Chinua Achebe book you've never seen before comes across the donation table, you've got to take it home, right?  That's what I figured, anyway, and it turned out to be a quite interesting little book of three lectures that turned into essays.

The three essays have a continuous train of thought, exploring the beginnings of modern African literature.  Starting with his own young days, in which the only novels about West Africa came from an outside perspective, he goes through the first stories that became available in the 1950s, starting with  The Palm-Wine Drinkard, the initial book that opened the gates.  (This made me happy, since I have that novel sitting on my pile...though I forgot to put it in my 20 Books of Summer list and now I'm sorry.)

He dissects a few novels: Mister Johnson, by Joyce Cary, which first gave Achebe a clue that stories could have an agenda, The Palm-Wine Drinkard, and V. S. Naipaul's A Bend in the River, of which Achebe is really not a big fan. (I didn't quite know what to make of it when I read it.)