The Sea and Poison 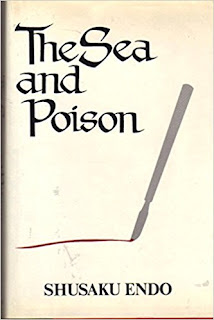 The Sea and Poison, by Shusaku Endo

I'm not sure why I have this book on my TBR shelf.  I thought it was one my brother-in-law had sent me; he used to send us books from Japan and so I have several volumes of Murakami, Endo, and Oe just sitting around.  But this one is a discard from the public library and I have no idea where it came from.  I'm also wondering what happened to my copy of Silence, which I remember loaning out in a pile to a friend's daughter who was studying Japanese (she is living there now!).  But she gave them back.  So where did Silence go?

This is a really tough novel, and it's written in such a quiet, understated way that the awfulness stands out all the more.  It's the story of Suguro, a young medical intern at a wartime hospital, as well as two others who work there.  The hospital is near the city of Fukuoka, but it's far enough out that it has not yet been bombed.  Supplies and food are short, and the hospital inmates (most of them seem to have TB) are dying; it's only a question of how long they have.  Suguro is mocked for his preoccupation with one old woman's case -- what's the point?  Then he is asked to assist at secret operations for the military.  Three American prisoners are to be vivisected, nominally for research purposes.

Suguro is not forced to take part, but he agrees to.  He ends up sickened and unable to participate, but it's too late.  He is tarred with the same brush as the others.  Two other participants have written their confessions and life stories: Toda, a cynical young doctor who thinks everything is pointless but nevertheless looks for ways to act upon his resentment and exert cruelty, and Ueda, a nurse who has lost everything and lives completely alone.

Endo shows us the social pressures exerted on the three protagonists and the effects of their choices.  In this environment, it is difficult to resist evil, but when they do not, guilt becomes their permanent companion.  Suguro's life is forever tainted by his failure to refuse.

Wrenching stuff.  Be prepared when you read it.
Asian literature TBR challenge

Marian H said…
Oh boy, I'm picking this up tomorrow from the library... hope it isn't too much for this squeamish reader. :/ I just re-read The Island of Dr. Moreau, though, so the topic of human cruelty has been on my mind. It's horrifying, but as history we just can't forget it.
May 30, 2018 at 10:04 PM

Amy Marie said…
Hi there! Thank you for changing the comments for me! I found you because of your posts on Elizabeth Goudge. She is one of my favorites! I STILL don't fully understand Silence by Endo For some reason, I don't "get" it. I appreciated it, but it didn't have the huge impact on me that it did on others. This sounds heart wrenching, indeed. Silence wasn't an easy read, but his writing was beautiful. Thanks for sharing about this title, not sure if it will make it to my stack, so it's good to get a brief overview of it.
May 31, 2018 at 12:36 PM

Jean said…
Marian, it shouldn't be too bad. I don't think it's worse than Dr. Moreau as far as descriptions of operations.

Kristen M. said…
This sounds a bit much for me but you've inspired me to sort through my unread Murakamis and commit to reading one of them this summer!
June 6, 2018 at 12:15 AM