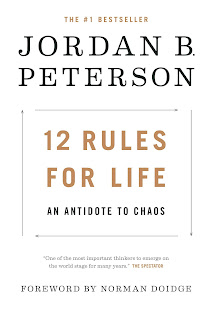 12 Rules for Life: An Antidote to Chaos, by Jordan B. Peterson

Oh, let's have a little controversy here at Howling Frog, shall we?  Oh boy.

Until fairly recently, Peterson was a popular but unfamous lecturer of psychology in Canada.  He'd done a stint at Harvard, written a book about Jungian psychological stuff, and was your average moderately-left Canadian.  Then he went on TV to protest a proposed law which would mandate the use of preferred pronouns.  (This is coerced speech.  It's not even censorship, the government saying you can't say something; it's the government saying that you HAVE to say something.  That is a power no government should have, and it's definitely worth protesting.)  And everything exploded.

Peterson is now enormously vilified and even more enormously popular.  His lectures are easily available on YouTube -- he talks a lot about archetypes and Jungian interpretations of myths and Bible stories.  He appeals to disaffected, directionless young men, essentially by ordering them to clean up their lives and make something of themselves.  While I get why a lot of people don't like Peterson, he seems to be making a real difference in the lives of exactly the kind of young men who are most at risk of falling into the trap of extremism.  Which all by itself makes him a rare and important influence, and somebody to keep around.

He had already been writing this book, I gather -- it's pretty hefty, 400 very dense pages -- and it wound up getting published at just the moment when everybody was starting to hear about this guy.  So I read it.

There are twelve 'rules,' which are unpacked in twelve long chapters.  They range from "stand up straight with your shoulders back" -- that is, be ready to engage with the world courageously -- to "assume that the person you are listening to might know something you don't."  The rules often turn into long pieces on the importance of attention, of building meaning in your life, and so on.  He sounds like a wordier Viktor Frankl sometimes, and he quotes Dostoevsky, Solzhenitsyn, and Nietzsche a good deal.

There is a lot about tragedy; Peterson figures that the central problem of life is dealing with the fact of suffering and evil.  Life is not about happiness, he says; happiness is fairly unusual and fleeting, so what are you going to do when things are bad?

It's a pretty interesting book, with lots to think about.

Stand up straight with your shoulders back
Treat yourself like someone you are responsible for helping
Make friends with people who want the best for you
Compare yourself to who you were yesterday, not to who someone else is today
Do not let your children do anything that makes you dislike them
Set your house in perfect order before you criticize the world
Pursue what is meaningful (not what is expedient)
Tell the truth – or, at least, don't lie
Assume that the person you are listening to might know something you don't
Be precise in your speech
Do not bother children when they are skateboarding
Pet a cat when you encounter one on the street