The Egg and I 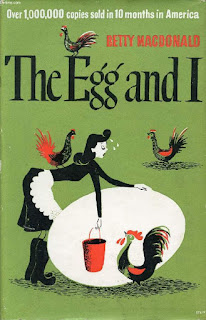 The Egg and I, by Betty MacDonald

This somewhat fictionalized memoir came across the donation table, and I'd heard somewhere that it was fun, so I took it home to read in random moments.  Betty MacDonald may be familiar to some as the author of the wonderful Mrs. Piggle-Wiggle books for children (in which Mrs. Piggle-Wiggle, who may be a witch and was definitely once married to a pirate, knows how to cure children who have fallen prey to bad habits and become Answer-Backers or Slow-Eaters-Tiny-Bite-Takers).

Betty MacDonald tells some hair-raising stories about her childhood in Colorado before she really gets going with her marriage to Bob.  Bob's dream is to be a chicken farmer in the Pacific Northwest and Betty gamely agrees, signing up for a life of isolation, no electricity, very hard work, and a stove that eats fuel but doesn't like to get warm.  And lots of rain.  And lovable but difficult neighbors, especially the Kettles.

She makes it all extremely funny and engaging, plus also you'll want to go live in the beautiful wilderness of Washington state.   If you take out the humor, you'll realize that it was a very hard life indeed and no wonder she was thankful to sell up and move to an easier spot.

It's a very enjoyable memoir, except for one thing; she is awful when writing about Native Americans.  I mean, terrible.  Luckily it's only a few chapters, but wow.  So watch out for that.

MacDonald wrote three other memoirs after this, about surviving the Depression, getting TB, and living on Puget Sound.


_____________________
One funny thing about my copy is that the type is exactly the same as in the Mrs. Piggle-Wiggle books I read as a kid.  Chapter headings and all.  They must have been printed at the same time, I suppose!
humor memoir/biography