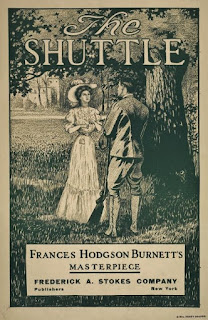 The Shuttle, by Frances Hodgson Burnett

Somebody posted a really nice piece about this novel a few months ago, and I put it on my tablet to read later.  Once I got started, I hardly put it down.  I enjoyed it a lot!  This is a novel aimed at adults, not children, but you can see many of the same strains of thought as you find in The Secret Garden or Little Lord Fauntleroy.  It was written in 1907, and you can tell; it's very Edwardian in tone, especially in the description of Betty.

This is the story of two sisters--the famous Vanderpoel sisters of New York, wealthy beyond imagining (think Vanderbilt).  Rosalie, small, affectionate, and not overly brainy, marries an English lord and sails away...and is cut off from her family.  Sir Nigel turns out to be debauched, penniless, and angry, and he wants control of his wife's money.  To get it, he manipulates and bullies Rosy, and makes her family believe that she does not desire visitors.  Betty is only a child, but she is very intelligent and is sure that her beloved Rosy needs help.  She spends her time getting an education and planning to rescue her sister as soon as possible.  When that day comes, she arrives and not only helps her sister and nephew--she starts whipping the manor house, the garden, and the village into shape. (Sir Nigel, having gained control of the money, spends most of his time away with mistresses.)  She also gets to know a neighbor, owner of an equally run-down manor, but he scorns to marry money.  When Sir Nigel returns, he is displeased--but he's cunning enough to start plotting instead of staging a scene.  Will he succeed in wreaking a revenge on everyone around him?

Burnett is asking a lot of moral questions.  She discusses the phenomenon of impoverished English lords marrying wealthy American girls--what should the 'rules' be?  If you are rich, what is your moral obligation?  What should you do with all that money?  If you are the penniless owner of a manor, what is the virtuous course of action?  How to discharge your hereditary duties with no money?  She never does manage to answer that one, but the moral obligation of the rich is clear.  It is to provide honest work to others, and pay them fairly.  That doesn't mean you can't buy nice clothes--seamstresses need work too--but it does mean you can't keep mistresses on the Riviera when you should be fixing the roof and keeping a beautiful garden that will heal souls (this is Burnett, after all!).

What surprised me about the book--and kept surprising me, though you'd think I'd get used to it--is how vocally and persistently pro-American Burnett is.  She goes on and on, criticizing British aristocratic habits or prejudices by comparing them to American ideas.  She is scathing about titled men who expect to marry a rich American girl and take control of her money, and talks about American men who would feel ashamed to take money from a woman, and who expect to earn a living.  She approves of American romantic notions about marriage.  She doesn't think much of European disdain for Americans, and praises American initiative, courage, and general can-do-itiveness.  She even puts in a can-do young New York salesman so she can praise American working folks.   It's a positive avalanche of praise for Americans, and Betty is the perfect embodiment of American womanhood--though she's happiest living in an English village!  (Burnett is also very pro English-village, patriarchy, and lord of the manor--it just has to be a good lord and she's all for it.  There are plenty of good landed gentry; it's the bad ones that get on her nerves.)

I had such a good time reading this; at first, I was going to read it pretty slowly, but once I got about a third of the way in, I could hardly put it down. It's long, and it's fun to read Burnett's opinions the whole time.
English literature