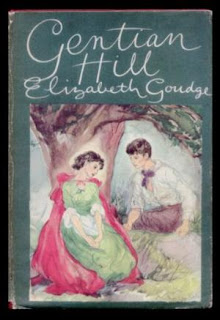 A while back I bought a couple of Elizabeth Goudge novels and this one has been waiting for quite a time.  It turned out to be a lovely read--as I would expect!  It's a historical fiction novel set during the Napoleonic wars, and some of it is based on actual events in the neighborhood of Torquay.

Anthony O'Connell is a very young midshipman in the Royal Navy, but he is on a bad ship, and after a particularly brutal punishment, he deserts to wander the countryside near Torquay--and changes his name to Zachary.  Stella Sprigg is a little farm girl and an orphan; as an infant, she survived an explosion onboard a ship in harbor that killed her mother, and her origins are unknown.  When she meets Zachary and feeds him, they become the best of friends.  Zachary finds shelter with the local doctor and healing for his troubles, and finds work on Stella's farm.

Eventually Zachary has to face his worst fears and go back to the Navy, where he matures and truly redeems himself.  He plays no important part in the war, but he is present at Trafalgar (and Goudge really shows how and why Nelson was so beloved).  He and Stella are parted for years, but both are learning and maturing in their own paths.

Many others play a part in Stella and Zachary's stories, especially the doctor, a Catholic scholar-priest, an elderly lady of the town, and of course Stella's foster parents and their farm hands.   In the leisurely development of the novel, we learn many of their stories, and eventually discover Stella's parentage.

I'm making this sound like Zachary is the only protagonist of this novel, and he isn't.  This is a double story, and Stella is just as important a protagonist as Zachary is; she is the heart of the novel, really.  And the entire story is built around the legend of St. Michael's Chapel, a 13th-century church at Torquay which was a pilgrimage spot for Catholic sailors until the 19th century.

Fear, and the overcoming of it, is Goudge's main theme.  Zachary is not the only one who has to face his fears and work through them, but his ordeal takes the foreground.  He is terrified of physical pain, and his return to the Navy is no fun at all; he hates almost everything, but learns to take it all in the right way and grow from it, and so reaps his reward.

He tried to do it well and willingly, since he had to do it, and achieved an outward show of zeal and cheerfulness that he found, to his astonishment, as useful to him as a suit of armour. Upon his first ship his only weapon had been his obstinacy, which had deceived no one as to the true state of his craven mind; he had been like a tortoise on its back, immovable but vulnerable, and inviting prodding. Now he was the right way up, and no one had any idea how vulnerable he really was.

At that moment he believed it was worth it. This moment of supreme beauty was worth all the wretchedness of the journey. It was always worth it. "For our light affliction, which is but for a moment, worketh for us a far more exceeding and eternal weight of glory." It was the central truth of existence, and all men knew it, though they might not know that they knew it. Each man followed his own star through so much pain because he knew it, and at  journeys end all the innumerable lights would glow into one.

His longing to get away was simply the coward's craving to escape from a particular bit of suffering without enduring it right through to its appointed end, and that was a thing that a man could not do.

Wisdom never quite died upon the earth. There had never yet been a day without, somewhere, birds' wings flashing in the sun and water lapping on a quiet shore. Eternity was a fact. Intellectually he had always known it, coldly and without conviction, but now the dry bones of fact seemed slowly to clothe themselves with flesh. Love was not just an emotion to be experienced or an abstraction to be argued about, but the actual stuff of eternal life...

Men, women, and children came and went seeking the doctor's help, and though the Abbe saw little of them, he realized with reverence and admiration how great is the power of a man whose good will is not bounded by creed or class.


Nobody is quite like Elizabeth Goudge.  It's no easy feat to write a book infused with faith that doesn't come off as overly sentimental or preachy or saccharine.  I liked this novel a lot; I think more than Green Dolphin Street.  Gentian Hill doesn't seem to be in print just now, but you can get it on Kindle for just a few bucks! I wonder if it's on sale right now; all the other Goudge titles are expensive.