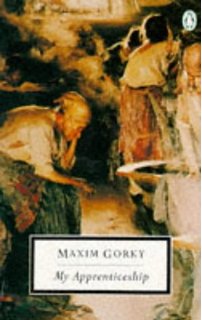 My Apprenticeship, by Maxim Gorky

To round out my month or so of Slavic reading--well, who's to say I'm done yet?--I've been reading the second volume of Gorky's autobiography.  I covered the first volume, My Childhood, back in January, and the third is on my TBR pile.  Let us also recall that Gorky's real name was Alexei Maximovich Peshkov, but he used his father's first name and Gorky, 'bitter,' for writing.  He was a major Soviet writer, so there are a bazillion things named after him.  There is a lot I don't understand yet about his character, so I need to do a lot more reading.

This book picks up right where Childhood left off, at age eleven when his grandfather throws him out to earn his own living.  Little Maxim goes through a whole series of jobs--a shoe store, cabin boy on a river barge, apprentice to an architect (where he mostly sweeps floors), an ikon workshop, and more.  Sometimes he goes home to his grandparents.  Life is always difficult and brutal, but he meets many interesting characters and sometimes develops important friendships.  Most crucially, he discovers books.

Books are Maxim's major preoccupation throughout this time: how to get them, how to find solitary time to read, and what he might be able to get next.  Books are usually difficult to come by, and so his reading is pretty random, but he manages to get quite a bit of real literature.  He's frequently scolded or beaten for reading, but it's his only solace.

He is also preoccupied with trying to understand why most of the people he sees are so horrible to each other.  He hates the casual violence that he sees all around him, yet when he gets angry he is just about as violent, and it's confusing.  He's an idealistic boy who venerates women, yet most of the men he knows are extremely abusive to women.


The animal enthusiasm of that herd of people made me want to throw myself at them and beat their filthy heads in with a log.

...one could not even begin to understand what people were really like, whether they were wicked or good, law-abiding or trouble-makers.  I used to ask the cook why this was so but he would only envelop his face in cigarette smoke and often he would say in an annoyed voice, "What's eating you?  People...well, are just people.  One's clever, the next's a fool  Don't talk so much and stick to your books...."

All that my master and mistress knew was how to take a superior attitude towards people and always find fault with them.  But if those people had in fact started living and thinking and feeling exactly as they themselves did, then it would not have made the slightest difference and they would still have found something to criticize in the.  That's the kind of people they were.

Nothing mutilates a man so horribly, destroys his capacity for suffering, as when he is subjected to conditions over which he has no control. [Jean says: I think I disagree with you.]


What I don't get about Gorky is how offended he is by violence and force, and then he turned around and supported the Soviet gulag system.  People told him about it; he knew, and they thought he would object.  But he didn't.  So I want to find out about that.
memoir/biography Russian literature TBR challenge

Anonymous said…
Nothing destroys a man's capacity for suffering as much as conditions over which he has no control? REALLY. That is so surprising a thing to say that I even sort of wonder if it is a mistranslation? Is that possible?

Jean said…
I dunno, I think it's an odd thing to say and yes...possibly nonsense/mistranslation. I mean, yeah, being stuck with no control is no fun. But OTOH most people in most times have had little control over their circumstances. It's not like it's unusual or especially, remarkably tragic.
September 8, 2016 at 2:14 PM

Arenel said…
Gorky does live up to the meaning of his pseudonym. I've read his major works, of course, they are kinda mandatory if you go to school in Russia, but I'm not sure I'll ever have an urge to reread them... It's a very dark kind of realism, and unnecessary distressing. I know life wasn't a piece of cake then, but he makes it look REALLY dim...
September 19, 2016 at 3:57 AM