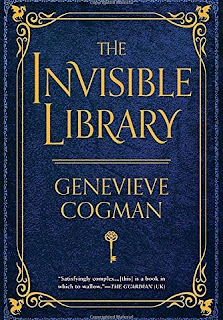 The Invisible Library, by Genevieve Cogman

This was just a fun read!  I will admit that I'm a little jaded about modern YA fantasy, with endless variations on fairies (ahem, the Fae or some version thereof).  But I enjoyed this a lot and I actually plan to read the next book in the series.

Irene is a Librarian, which means she travels to alternate worlds, collecting important texts for the Invisible Library that archives...well, everything.  In this multiverse setup, the forces of Order and Chaos--with their respective representatives, the dragons and the Fae--are engaged in a tug-of-war for each individual world.

Irene's latest assignment is in a Europe that is heavily Fae-infected.  She is to take a unique version of Grimm's Fairy Tales, and she is given a new assistant, Kai, to train along the way.  But when they arrive, the book has already been stolen.  Irene and Kai have to solve a mystery, out-maneuver the Fae, and face down both a personal rival and a terrifying, legendary Librarian gone bad.

I'm already disposed to like library fantasy, and this is pretty well done.  It reminded me forcibly of the Librarians TV series that was on a while ago, but the worldbuilding is of course somewhat deeper.  I'm looking forward to reading the sequel, The Masked City, and wondering if some of the mysteries of this book will be solved!