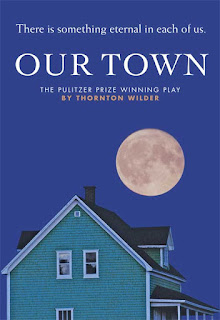 Our Town, by Thornton Wilder

The introduction to Our Town says that a lot of students read, or see, the play when they're younger--in junior high--and they tend to think it's schmaltzy.  I was lucky, I guess; I've never seen or read Our Town at all, and so only got to read it as an adult.  It made me think of that song from Fiddler on the Roof, "Sunrise, Sunset."  When I was a kid I thought that was the dumbest, sappiest song on earth.  Now I cry every time I hear it, because some things you only get when you've been around for a little while.

Our Town is a simple, stripped-down play, set in a small town in around 1900.  The three acts take place years apart.  A narrator comments on events, pointing out the daily routines in the background, and the events going on all the time.  Emily, who emerges as the main character, appears as a child, a teen, and a young bride.  In the third act, she has died, and she meets all the other dead folks in the graveyard.  They've let go of life, and Emily doesn't understand why until she visits her own 12th birthday.  The sight of everyone going about their lives, blind to the amazing and fleeting gift of just being together in the world, is more than she can stand.


"Oh, Mama, just look at me one minute as though you really saw me. Mama, fourteen years have gone by. I'm dead. You're a grandmother, Mama. I married George Gibbs, Mama. Wally's dead, too. Mama, his appendix burst on a camping trip to North Conway. We felt just terrible about it - don't you remember? But, just for a moment now we're all together. Mama, just for a moment we're happy. Let's look at one another."

Wilder reminds us--often starkly--of how short life is, and how suddenly it can be taken away.  It's funny how often human beings need to be reminded of such an obvious thing, and yet we do.

This was a revolutionary play for American theater when it debuted.  The lack of sets, the characters who are also archetypes, the simple, direct language--the refusal of decoration or euphemism--were radically modern stuff in 1937.  Wilder's idea was "to find a value above all price for the smallest events in our daily life."  So Emily dwells on the joy of sunflowers and ironed dresses, and we feel the importance of everything.  At the same time, Wilder points out tragedy--the alcoholic choirmaster's suicide, the death of Joe on the battlefields of France--and he does it cruelly, without prettying it up one bit.

I had no idea what I was getting into when I started reading.  I'll have to see the play properly someday.  And if you had to read it in 7th grade and thought it was sappy, go back and take a second look.