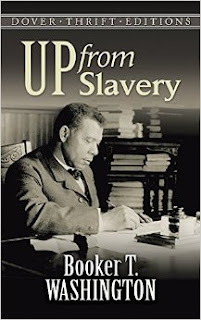 Up From Slavery, by Booker T. Washington

A few years ago I read W. E. B. DuBois' The Souls of Black Folk  as part of my Classics Club list and realized that really, I should have read Up From Slavery first, since DuBois was responding to Washington in his book, although DuBois was writing analytical and historical essays on several topics, while Washington was mostly writing a memoir in which he also talked about his ideas.  But then I didn't get a copy for a long time, until a friend of mine traded my DuBois for his Washington.  Once I got started, I didn't put it down and devoured the whole thing as fast as I could.

Washington recounts his early life in slavery, and young manhood in freedom.  He wanted desperately to go to school, and mostly persevered despite the difficulties poverty threw in his way.  At last he conceived an ambition to attend a black technical school that he heard would allow students to work for their board.  His determination to get there brought him through every sort of difficulty, and he worked as a janitor to pay for his schooling.  He became a teacher and returned to his home town to start a school.

After some time teaching, he was recalled to the technical institute to run a night school for working people who could not attend full-time.  He made a success at it and was then asked to begin a whole new school at Tuskegee, run along the same lines--and so the rest of the book is dedicated to the establishment and philosophy of the school at Tuskegee, together with Washington's increasing speaking commitments and public work.

That's a very lifeless summary of an amazing and inspiring memoir.  Washington was a brilliant and wise man, and that wisdom shines on every page.  I can't possibly do justice to it, but we would all do well to read what he has to say and take his ideas into our own lives.  I didn't mark all my favorite bits--it is, after all, my friend's book, though I'll be buying my own copy--but I tagged a few.


The great and prevailing idea that seemed to take possession of every one was to prepare himself to lift up the people at his home.  No one seemed to think of himself.

Before the end of the year,  I think I began learning that those who are happiest are those who do the most for others.

It means a great deal, I think, to start off on a foundation which one has made for one's self.

...I learned the lesson that only little men cherish a spirit of hatred.  I learned that assistance given to the weak makes the one who gives it strong; and that oppression of the unfortunate makes one weak.
It is now long ago that I learned this lesson...and resolved that I would permit to man, no matter what his colour might be, to narrow and degrade my soul by making me hate him.

This is officially a Book Everyone Should Read.

Cleo said…
I absolutely love Booker T. Washington. Instead of lamenting or showing anger, he started doing, and really made a difference in so many lives. He is definitely my idea of a hero. You are so right when you say this is a "must-read" biography.
April 20, 2016 at 10:35 PM

Anonymous said…
Hey! I was just reading about Booker T. Washington today. I started a book about the way Frederick Douglass wrote about himself autobiographically over the course of his lifetime? And in the introduction the author says a lot about the way different thinkers and scholars have read Douglass differently -- apparently both Booker T. Washington and WEB DuBois corraled his work as evidence that their position on how to do black resistance was the correct one. Interesting, no?
April 21, 2016 at 5:00 PM

Jean said…
Oh, that is interesting! Well, they both have things to recommend them. I'd quite like to read a comparison of their ideas, really.
April 22, 2016 at 10:38 AM