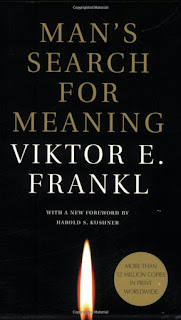 I've been wanting to re-read this for a while.  I think it qualifies as one of the important books of the 20th century, a must-read, though I'm not sure how Frankl's ideas about psychotherapy are viewed now.

The first half of the book is Frankl's personal account of his time in Nazi concentration camps.   It's not chronological and exact; it's more a series of stories and impressions, and his views on how he and his fellow prisoners kept going--or not--under such horrific conditions.  Frankl's assertion is that the way to find meaning in life, under any circumstance, is to turn the question around:


...it did not really matter what we expected from life, but rather what life expected from us.  We needed to stop asking about the meaning of life, and instead to think of ourselves as those who were being questioned by life--daily and hourly.  Our answer must consist, not in talk and meditation, but in right action and in right conduct.

The experiences of camp life show that man does have a choice of action.  There were enough examples, often of a heroic nature, which proved that apathy can be overcome, irritability suppressed.  Man can preserve a vestige of spiritual freedom, of independence of mind, even in such terrible conditions of psychic and physical stress.
We who lived in concentration camps can remember the men who walked through the huts comforting others, giving away their last piece of bread.  They may have been few in number, but they offer sufficient proof that everything can be taken from a man but one thing: the last of the human freedoms--to choose one's attitude in any given set of circumstances, to choose one's own way.
And there were always choices to makes.  Every day, every hour, offered the opportunity to make a decision, a decision which determined whether you would or would not submit to those powers which threatened to rob you of your very self, your inner freedom...the sort of person the prisoner became was the result of an inner decision, and not the result of camp influences alone.  Fundamentally, therefore, any man can, even under such circumstances, decide what shall become of him--mentally and spiritually.  He may retain his human dignity even in a concentration camp.

The second half of the book is a short description of how Frankl took the insights he gained in the camps and used them in his psychiatric practice, developing the principles of what he called logotherapy.  He also includes a piece called "The Case for a Tragic Optimism," which continues the discussion for a bit.

It's good stuff.  Everybody ought to read this book, so if you haven't, get to it!