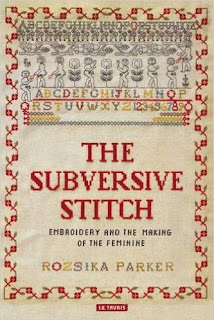 The Subversive Stitch: Embroidery and the Making of the Feminine, by Rozika Parker

I only found out this book existed a couple of months ago, and then I ILLed it right away.  History of embroidery and talking about what it meant for women?  Yes please!  Sadly the ILL did not come up with the 2010 edition, but it is just the same except for an additional foreword, so wasn't really a big deal.  Parker passed away soon after that, so we cannot hope for a revised and updated edition, but I hope more people will write about it.

Parker traces a history of embroidery, almost entirely in England (huge tomes could be written about every country in the world, so it's good to focus), starting with the Middle Ages.  At that time, large-scale embroidery was mostly an industry with employees, and the majority of those employees were probably men.  Embroidery was not a gender-specific activity, as it became later.

She covers the development of different techniques-- Opus Anglicanum, Renaissance methods that looked like painting, up to later stumpwork, tambour on netting, right up to Berlin work and modern art--and how embroidery gradually became a subordinate art, lower on the scale than painting and sculpture.  In fact it was considered a craft rather than an art, lacking originality and prestige.

Embroidery also became more and more something that women did, whether for work or for leisure.  Eventually, embroidery was so completely identified with womanhood that it was considered the very definition of femininity.  Girls were expected to spend hours at it whether they liked it or not, and it was a major part of female education at every level.  Of course, embroidery workshops were filled with young girls working in terrible conditions.  Needlework could be a source of misery and oppression.  At the same time, many women enjoyed embroidery and found it a source of solace,  creativity, and even assertion of personal or political ideas.

The women's suffrage movement used its members' skills in needlework to good effect, producing banners that combined techniques and art forms.  Women started trying to use embroidery as a form of protest or assertion or art, with mixed results and reactions--sometimes the intended meaning got lost when others could only see one aspect of the work.  Early Communist Russia makes an appearance here, which is interesting, but without a solid background in Russian embroidery history, it felt awkward.

The main problem I had with this book is that, by covering a thousand years of embroidery, even if mostly only in one country, Parker had to remain pretty shallow.  A broad survey is probably what most people would want, though, and I did enjoy it; it's just that I would happily read 14 in-depth books, one for each period of history and type of embroidery.  I'd read a whole book on the history, techniques, and societal implications of Opus Anglicanum alone, so the chapter it got just didn't seem like enough to me.  Likewise, the analysis seemed shallow, because so little time is spent on any one thing.  How does Parker know that 15th-century images of the Virgin Mary were supposed to "discourage the worship of Mary from raising the status of earthly women, while glorifying domesticity"? (note to fig. 39)  She just says it and then moves on.

The analysis is also very 80s-feminist-academic, but that's what it is.  It's marked enough that a reader will really notice it, so I feel like I ought to note it.

Embroiderers will be interested but want more depth.  Others will probably think it's more than enough, but it's well worth reading if you're interested in women's history.
history sewing