Off the Beaten Track in the Classics

A couple of years ago, Dwight the Common Reader did a series of posts on this little book, and it sounded so fun that I put it on my wishlist.  I finally got around to ILLing a copy for myself and it came from all the way across the country, and very glad I am too.  I wish I had my own copy of this fun little book! 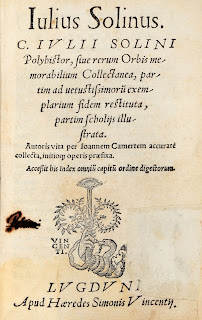 Carl Kaeppel was a classical scholar from Melbourne who worked in the British Museum (does this therefore count as AusLiterature?), and the book was in fact printed in Australia in 1936, but in association with Oxford, so it happily received wider exposure.  It's a collection of short essays about slightly lesser-known classical works; in fact some of them are lost works that we only know through references and excerpts.  Nearly all of them are about travel or geography somehow.

The first essay is on the work of one Gaius Julius Solinus, otherwise known as Polyhistor, who collected wonder-tales.  They were very popular, and some endured for centuries, making it into Sir John Mandeville's works.  Dog-headed men, gryphons, lands full of gold, pygmies, it's all in there, and Kaeppel is not really a fan.  He really prefers factual travel records instead of the fantastic, and he's pretty down on the Dark Ages, saying "They did not desire knowledge."  Personally I disagree, but Kaeppel does come up with an observation we can all profit from: "Neither knowledge or civilization is stable or assured; they must be kept so by those to whom they are entrusted."

I was disappointed to find that nobody has bothered to translate Polyhistor into English, as far as I can tell, for over 400 years.  Arthur Golding's is "a quaint and charming work, though more a paraphrase than a translation" and it's not easy to find a copy, but I plan to give it a good try one of these days.


Next up is the Periplus of Hanno, from about 500 BC.  This was really fascinating, and the actual text is so short that it's included in both the Greek and an English translation (thank goodness; Kaeppel is mostly one of those scholars who does not bother to give translations, since obviously his readers are fluent in Greek and Latin).  This Phoenician, Hanno, let a colonization convoy of ships through the Gibraltar straits and down the west coast of Africa, all the way to about modern Sierra Leone, before turning back home.  Wow!  Kaeppel spends a lot of time proving that the document really is that old, and that it is genuine, citing certain incidents that were once assumed to be made up as proof.

At last Hanno got to the "Island of Gorillas," where he saw creatures that were probably chimpanzees.  His guides called them gorillas, and in the 1840s, a Victorian biologist used the name for the large apes he was studying.  All this information made me inordinately happy, because to me, the name Hanno indicates gorillas.  In L. M. Boston's children's series about Green Knowe, there is a story about a gorilla named Hanno, after the Phoenician explorer.  I went and looked it up to check.

The rest of the essays are also fun, usually about travel and exploration.  There is even a Greek who sailed all around Britain!  And the final essay is about the legends of poison-damsels, where they came from and how they spread in Europe.

I really had fun with this.