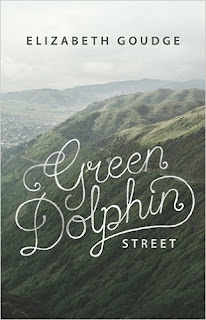 It's Elizabeth Goudge Day, hosted by Lory at Emerald City Book Review.  Because April 24th is Elizabeth Goudge's birthday, you see.  So I read Green Dolphin Street, which was on my TBR shelf anyway.  I really had no idea what to expect, except that there was something about New Zealand.

In the mid-1800s on the tiny Island in the English Channel, there are two sisters--Marianne and Marguerite.  When William moves in next door, they both fall in love with him.  But once they're all grown, William joins the Navy and, on a long voyage to China, disappears.  Nearly ten years go by before he writes to say that he is established in New Zealand and asks for one of the sisters in marriage.  But the story follows all three throughout their lives, so there's much more after that. 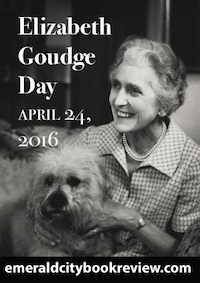 It's a long, leisured novel--mine is 500 pages of small print--and it took me a while to get into the story, but I did and eventually spent an entire Sunday afternoon reading the second half.  It builds a bit slowly at first, but then moves along, and then there's a lot of frontier action too.

Goudge was really quite a genius at taking a hackneyed old plot like "two sisters in love with the same man" and turning it into something unexpected, fresh, and redemptive.  She did it pretty often.   Here, the three protagonists have long, troubled roads, and their lives turn out otherwise than expected, but they are also all engaged in a lifelong work of saving each other.  There is a lot about love, and what that really means.  Is it necessary to be married to your true love?  What if you are not?  What is marriage meant to do, and what work should it accomplish?  Are there other ways to love and do good?  How do we each find our life's work?  Goudge's answers to most of these questions are very, very different than you'd get from almost any other novelist.

There's also a remarkable amount of adventure.  Between sailing ships, unwelcoming Maoris, earthquakes and crashing tides, there's more action than I've ever seen in an Elizabeth Goudge novel, since they're usually very bucolic-England.  Green Dolphin Street is not one bit bucolic, but it's characteristic Goudge in other ways.

I think this is the most famous of her novels, because there was a movie made and it won an Oscar (for special effects!), but I get the impression that the movie isn't really much like the book.  I don't think it would be possible to cram much of this novel into a movie--even as a miniseries you'd need ten episodes.  It would be interesting to see if anyone would make it into a series, come to think of it, but I don't think Goudge and the BBC would get along too well.  TV writers would rip out all the bits Goudge would have thought most important, and would write them the opposite way.  So let's not try.

Now I'm a bit in the mood to re-read the Eliot Chronicles, but I don't own those...yet.