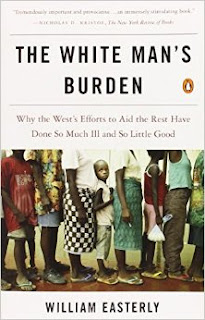 The White Man's Burden: Why the West's Efforts to Aid the Rest Have Done So Much Ill and So Little Good, by William Easterly

I have really let the books pile up on my desk, but deadlines like "ILL return date" help me out.  So here goes.

Every so often, a politician makes a big speech about how mosquito nets only cost a dollar and notebooks are even less, and if we just commit the money, we can solve poverty.  All we need to do is have a plan and the money, and it can be done!  Except, they've been making that speech for 60 years now, and while progress has been made, there are still millions of unvaccinated children, lots of unpotable water, and all sorts of terrible problems.  Is it that we just haven't given enough money?  What's the problem?  Easterly, an economist who has spent much of his career in the developing world and foreign aid, has a lot to say about what the problem is.

From Easterly's perspective, a lot of the problem is that we throw money around, but we do it in a stupid way.  We come up with gigantic plans to solve everything, make everybody work on it, give all the money to corrupt governments, and are then surprised when nobody is particularly accountable, nothing much happens, and an awful lot of money disappears into corrupt pockets.  Sweeping utopian plans are bad, because they lack focus or accountability.  The solution, he argues, is to accept that change comes one bit at a time, in a local manner, on the ground, mostly from the people who actually live there.  Agencies should seek for solutions to small problems, not try to solve everything at once.

His terms for this are Planners vs. Seekers.  Planners are top-down, blanket solution types; they don't ask what the people involved would like to do.  This is ineffective (and condescending, and really kind of neo-colonial).  Seekers are more likely to look for realistic solutions to a particular problem and then tackle it with the input of the people who live there.  The question is not "How can the West end poverty in the Rest?" -- it's "What can foreign aid do for poor people?"  Because it's not at all certain that the West can solve global poverty.  But it can probably do some good stuff.

Some ground rules:
He's an opinionated guy, with a lot of experience, statistics, and stories to back up his assertions, and this books is very much worth reading.   Final thought:


Piecemeal reformers, foreign and domestic, can try to move toward better systems that are sensitive to local conditions and that unshackle the dynamism of individuals everywhere.  The dynamism of the poor at the bottom has much more potential than plans at the top.

This sounds super fascinating -- ethics and effectiveness in charitable giving is one of those topics I keep meaning to dive into and really get a handle on, and then I keep forgetting to actually do it. Adding this to the list, since it sounds like you thought it was a good one!

Also, not to be a broken record re: how great Namibia is BUT, one of the reasons Namibia is good on conservation is that the government lets a lot of the organization around conservation efforts to be made at the local level. Like for instance ecotourism is a big thing in Namibia and those programs are overwhelmingly run locally, with the profits going to the areas where the tourism is happening. NAMIBIA.
April 13, 2016 at 4:07 PM

Jean said…
Aw, thanks Jenny! I do think you would enjoy this one. I heard about another book on a similar theme that has a title about 'distance' -- the idea being that in order to solve problems, you have to get up close and get rid of distance. So I might look that one up too.
April 14, 2016 at 5:29 PM

Cleo said…
I went to a homeschooling seminar where a wife of a prominent CEO of a well-known charitable organization was speaking. They had travelled to Uganda and asked the government what they could do to help the country. The answer was: stop the AID! They were absolutely shocked but the government explained that the UN workers giving out free clothes on the streets were putting their tailors out of business; the free food was not helping their agriculture, etc. It was very eye-opening. There was also issues with countries donating heavy equipment for roads, etc. but when the equipment broke down, there was no means to fix it. They were actually starting to get programs going with manual labourers which were working much better.

I like those ground rules. I've been reading quite a number of books lately which are advocating change at a local level and I'm starting to think true/real change is uncommon, or even impossible, on a social governmental level. It's too impersonal and the people involved do not really understand the problems because they are looking at them from a distance. This sounds like a great book. I'm going to see if I can get my hands on it.
April 18, 2016 at 7:23 AM