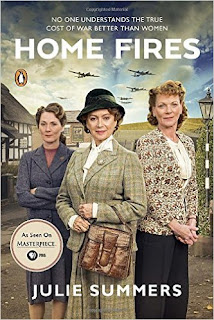 Home Fires: The Story of the Women's Institute in the Second World War, by Julie Summers

You know what?  I have been pretty lucky this month to have read several really great, inspiring books.  That has been really nice.  Here is one of them.

I was super-excited to get this book--it just has everything I like.  Women working together to solve problems!  History!  Yes!  OK, so first we have to find out what the Women's Institute is, which I was pretty fuzzy on.  I'd heard of it, but I didn't realize that it's an organization specifically for women living in rural areas.  Back at the beginning of the 20th century, a movement started (in Canada) to organize self-education groups for rural women, and it hit Wales and England around the time of the First World War (Scotland has a separate group).  The WI aimed to bring life back to declining rural areas and encourage women to work together for education, culture, and so on.

When war broke out in 1939, quite a few people debated closing WI chapters for the duration, but quickly realized that in fact there would be an incredible amount of work to do, and the WI was a great vehicle to get things done.  They immediately started working on increasing food production, by gleaning unused fruit crops and making jam (full of vitamins, doesn't spoil, ideal wartime food), and planting crops in bits of waste land and in gardens.  WI chapters even harvested country herbs for the production of medicines and encouraged members to plant foxgloves to make heart medications.

The numbers of people living in the country doubled (and then grew more) practically overnight, as children and mothers were evacuated, entire schools relocated, and government offices and even businesses moved out of London...oh, and soldiers were stationed all over the place.  The WI was instrumental in getting evacuees placed, ironing out the snags, and feeding everybody.  Think of all the strain on the infrastructure!

There was simply an incredible amount of work to do, and the WI coordinated or did a tremendous amount of it.  Myriad salvage operations, health-care jobs, knitting for refugees and troops, helping land girls, fundraising for everything from ambulances to POWs, even rabbit-fur production to keep Russians warm--they seem to have tackled anything and everything with unfailing energy and dedication.  (And keep in mind that a majority of rural women still didn't have indoor plumbing or electricity--even running water wasn't guaranteed.)  Government officials knew that they could call on the WI for help with almost anything and get a response; the smart ones also knew to treat members with a great deal of respect and stay on their right side.

I couldn't put the book down, and by the end I was in awe of everything WI members accomplished.  I now feel completely, utterly inadequate and inferior, but very inspired.  Maybe I can do better.  This is the kind of work that I truly respect; the everyday, unglamorous kind of work that may not earn laurels but is the stuff of life.  Summers comments:


The village of Milton in Cambridgeshire had a wartime motto which I think sums up the contribution made by the WI: 'Say little, serve all, pass on.  This the the true greatness -- to serve unnoticed and work unseen.'  Women did not trumpet their achievements and many of them were unquantifiable anyway since the aim was to keep going, and make life a little easier for others.


Julie Summers has written a couple of other history books that I will certainly have to read--one is about evacuee children, and another about the difficulties of adjusting to life in peacetime, when husbands came home.  I have got to read that!

ITV made a dramatic TV series based on this book (which was originally titled Jambusters in the UK; the title was changed in the US to match the TV show).  I haven't managed to watch more than about 1.5 episodes yet, so I haven't got a good idea of how I like it.  My daughter asked me why I thought I might like this, when I didn't like Downton Abbey.  (I thought Downton Abbey was too soapy, though the clothes were certainly wonderful.)  When I thought about it, I told her that I liked the Home Fires book because it's about real women and how they solved problems, and I was hoping the TV show would be like that--but so far I don't know.  I liked it OK, but it's kind of like a checklist (as I was discussing with my mom the other day).  You have to have a snotty queen bee, and an abused wife, and somebody who will have Forbidden Desire--preferably the rector's wife--and so on.  We shall see.

I do like the theme song!  Here it is for you.