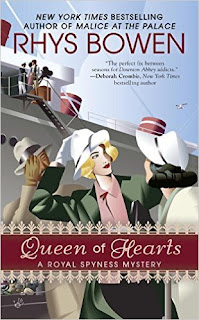 Queen of Hearts, by Rhys Bowen

I've been on a fun-mystery binge lately.  I mean, massive hits of Agatha Christie and Patricia Wentworth!  Plus, I found a new Royal Spyness mystery, and realized I was completely behind with those, so I grabbed the two newest.  I had particular fun with Queen of Hearts, the 8th in the series (I missed a few in the middle, they don't seem to be at the library).

Georgie, penniless minor royal, is for once not worried about where her next meal is coming from.* Her usually-absent glamorous actress mother has swooped in and picked her up for a trip to America, where she will head to Reno for a quick divorce.  During the Atlantic crossing, Georgie starts a hunt for a clever jewel thief and meets lots of glamorous types, including Cy Goldman (William Randolph Hearst in disguise).  Goldman begs Georgie's mother to act in a Hollywood film while she waits, so it's off to Los Angeles...and Alhambra (aka Hearst Castle), where somebody promptly gets murdered.

This was a fun mystery and a nice change of scene for the series.  I have really gotten a kick out of the Royal Spyness books.

What really caught my interest, though, was the "Alhambra" part of the story.  I finally got the opportunity to visit Hearst Castle last summer--despite having grown up not very far from there, I'd managed to miss previous chances--and so I had a lot of fun playing spot-the-location.  Bowen did move the castle, to about 5 minutes outside of Los Angeles instead of the many miles it actually is.  She really got the feel of it right; the whole place is built of fabulously valuable antiques all shoved together in a crazy patchwork that's all about making a stunning effect.  It's a very Hollywood kind of place--if a piece was too small, for example, Hearst would just have it copied larger and installed. 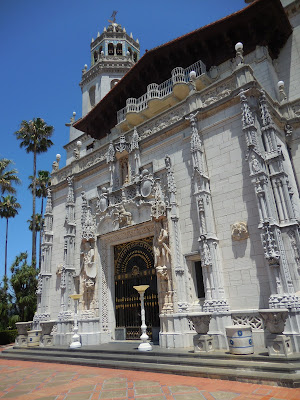 The other fun Hearst element was that several times, Goldman mentions that he has just purchased most of a Spanish convent, which he's had boxed up and shipped.  He plans to turn it into a poolhouse to change clothes in.  This caught my attention, because Hearst really did buy something like that--he bought a semi-ruined Spanish abbey, the Cistercian abbey of Santa Maria de Oliva, in 1931, planning to incorporate it into a vacation castle near Mount Shasta in Northern California.  He shipped the whole thing over to San Francisco just as the Depression hit him hard, so he left everything in warehouses in Golden Gate Park....for years.  The strange and fascinating saga is too long to tell here, but you can read about it at Sacred Stones, the site run by the Cistercian abbey of New Clairvaux, which is practically up the street from my town.  They have been putting the chapter house together, and I visited it last year.  It's amazing!


I presume Bowen spun her story out of the real-life Spanish abbey incident.  I wonder if she came up here to visit the chapter house?

I really, really think you should visit the Sacred Stones site and read the history.  I promise it is worth your while.


________________________________
*Georgie's eternal pickle is that she has no income but isn't allowed to get most jobs, and anyway there are no jobs because there's a depression and plenty of other people even more desperate than she is.  Everyone else's solution to this problem is that she should marry a minor prince, but Georgie is not keen.
mystery