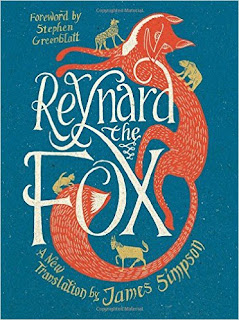 Reynard the Fox: a New Translation by James Simpson

Reynard tales were really, really popular in medieval Europe; you can find many versions of the stories in various languages, and this is a modern translation of the 15th-century Caxton edition in English.  Reynard tales are satirical animal stories, very much like B'rer Rabbit stories, but starring a cunning fox who does awful things, mostly to nobles or priests, and then gets out of trouble with his quick wits and fast talking.

In the royal court of the king (a lion, of course), every animal has a place, except for Reynard, who has swindled or murdered so many people that he is universally hated.    In every adventure, though, he manages to come out on top...eventually.  Reynard is really good at using people's greed or anger against them.

It's really fun to find all the animal names and see how common they became.  "Reynard" came to be a synonym with fox, and in fact replaced the Old French word goupil.  Isengrim the wolf, Chaunticleer the rooster, Tybert the cat, and others might sound familiar, and of course the King is a lion.

As you should expect with medieval humor, it's really pretty violent, and gross or bawdy at times.  It's also very clever and satirical, and a lot of fun to read.