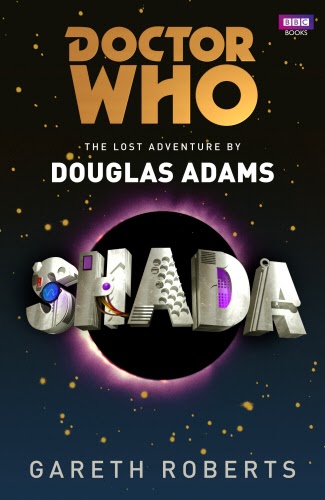 Shada: the Lost Adventure by Douglas Adams (Doctor Who), by Gareth Roberts

Is that a confusing enough title for you?  Here is the story: Douglas Adams wrote a 6-part script for Doctor Who (the Tom Baker incarnation) that he really was not very happy about, because he wanted to write a different script entirely but they wouldn't let him, so he wrote this instead but under too much deadline, and he was quite relieved when there was a strike and filming stopped halfway through and it was never finished.  Somebody released what material there was on video, but it's kind of a mess.  Years later, this Gareth Roberts fellow (also a script-writer for Doctor Who) got asked to write up the script as a novel, and he spent months on it, figuring out what Adams really meant to do and all that.  Here is the result.

Chris Parsons, a nice but clueless physics student at Cambridge, borrows some high-level books from doddery old Professor Chronotis because he wants to impress his fellow-student Clare.  Professor Chronotis, however, is a retired Time Lord in disguise (Cambridge being a perfect setting, since nobody has noticed that he has been a doddery old don for about 300 years now) and Chris accidentally borrows The Worshipful and Ancient Law of Gallifrey, one of the most powerful Artefacts of the old Time Lords.  At the same time, Skagra is planning to steal the book in order to take over the universe, which is right about when the Doctor and Romana show up.

OK, so on the whole this is a great Doctor Who adventure novel.  The plot works really well, the whole thing is very funny, and you can really hear Douglas Adams' voice through much of it.  Any Adams fan would recognize this as one of his.  Roberts supports the Adams voice and, I think, tries not to interrupt that with his own stuff; he put in a lot, of course, but it doesn't clash.  The story is also very visual; it's really easy to see the manic grin and flying stripey scarf in your mind.

I really had fun with this book.  I think any Adams fan would want to read it.  I presume nearly all Douglas Adams fans are also fans of old-school Doctor Who--if you drew a Venn diagram they would almost overlap, right?  My 13-yo daughter liked it a lot, and I'm betting my husband will too.

As long as we're on the subject, let's note that today is Douglas Adams' birthday!  Hug your towel and raise a glass in celebration.