By Jean - March 02, 2014
Today Kristen wants to know what we think about the Chrestomanci Chronicles.  These are, in order of publication:
Witch Week is the first of these that I read, and I think it must be one of the first DWJ books that I read at all; it would have been pretty new then.   I read the three other main titles in the mid-to-late 80s, and it took me years to get something resembling a timeline sorted out.  The last two were a happy surprise.  I am really glad DWJ went back to the Chrestomanci universe for a couple more books.

For non-fans, the books are set in a multiverse of twelve Related Worlds, with nearly all the 'worlds' containing a series of nine closely-related worlds.  The Chrestomanci's job is to make sure that magic is not misused on his world (12A), but he is a general straightener-outer of magical trouble and there is a lot of world-traveling in the stories.

Chrestomanci is a fantastic character.  Aloof, suave, terrifyingly well-dressed and sarcastic, he seems barely human until you get to know him, but he is also imaginative, bumptious, and always on the side of good.  His penchant for wearing flamboyant dressing-gowns has my older daughter wishing for one too.

DWJ's humor comes out wonderfully in these books.  They are so very funny!  The most absurd things happen, and they are wonderfully described.  A Chrestomanci book is guaranteed to have you in stitches.  At the same time, DWJ throws in sly, quiet little insights that stay with you. 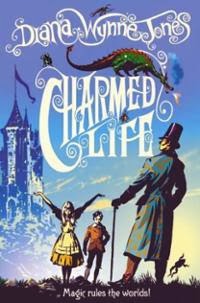 I've just gotten my 10-year-old daughter to start reading the Chrestomanci books.  She is a little reluctant to read anything that she doesn't already know she will like, so even though she likes DWJ, even though I told her these are very funny, she had to be nudged a bit.  I actually assigned her to read the first few chapters of Witch Week for school--I knew she would love it if she could just get past the first few setting-up chapters, and indeed it was a huge success.  She loved it.  Then I did the same thing with The Lives of Christopher Chant, but I read quite a bit aloud to her too.  She likes having me read, and I tell you what--reading DWJ aloud is so enjoyable.  It forces me to slow down, so I catch more details, and her writing is just a joy to read out loud.  I really get to savor those perfect sentences and watch my daughter's delighted reactions too.


Chrestomanci seems to be a favorite of the fan-art crowd (a close second to Howl), so if you google it there is some quite good stuff out there.  Some of it even looks something like Chrestomanci does in my head, which is quite tricky to do.
DWJ Month