Tale of the Troika 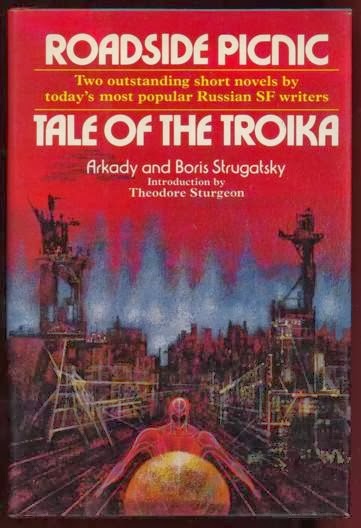 Tale of the Troika, by Boris and Arkady Strugatsky

I just finished the second novel in my double volume; the first one was Roadside Picnic, which I read in January.  This novel is shorter and weirder.  It is surreal and absurdist, satirizing bureaucracy and government in a story that would remind you of Kafka if it wasn't so funny.

Far in the future, the world is divided into floors accessible only by elevator, but the elevator doesn't work too well and won't go above the 13th floor.  The unnamed narrator and Eddie are scientists from the Institute of Magic and  Wizardry, and they are going to be the first people in generations to go past that; they are venturing to the 76th floor, the Colony of Unexplained Phenomena, with requisition forms.  They hope to obtain two items: an Ideal Black Box and a legendary Talking Bedbug.  No one knows what they will find, but Eddie has a humanizing machine with which he theorizes that any creature with a little reason can be changed into a decent being.

On the 76th floor, the two men turn in their forms to the governing troika, a body of four men who spend all their time arguing obscure points of paperwork and "rationalizing" reality.  Reality is pretty weird too, as the men meet Commissar Zubo, the Abominable Snowman, and a pterodactyl.  Dreams of obtaining the items they came for seem more futile all the time, as the narrator is given an old typewriter instead of an Ideal Black Box (it's black, it's a box, what does he want?) and the Talking Bedbug talks about revolution.  The troika are impervious to Eddie's humanizing invention, and the two are near despair.

So many questions about this story!  Is the world a gigantic thousand-story building?  In that case why can they see the sky and go outside?  Many more, too.

I would love to read this again someday; it is so weird.
Russian literature SF/fantasy