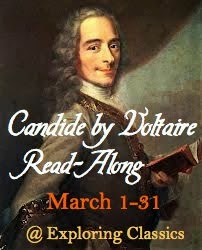 The Candide Readalong has begun, and I'm already kind of behind schedule.  I tried to get hold of a copy that would have more helpful notes and whatnot, but my attempt failed, so I'm reading my little Dover Thrift Edition, which to my surprise actually does have some footnotes, but not many.  There are maybe 15.  Anyway, I read chapters I-VIII last night (except I'm posting this two days later)
.  They are very short, but you have to pay close attention or you'll miss something.

Candide was written as a vicious satire of the brand of philosophy that insisted that this is the best of all possible worlds, and that everything happens for a really good reason and it couldn't be better.  So we are about to read a story in which Candide, an innocent young man, and his teacher Pangloss, the tutor who preaches this philosophy and insists that there is no free will but everyone makes choices, are about to spend the next 100 pages seeing horrible disasters, suffering needless torments, and generally having an awful time of it.  Everyone else will suffer even more, all to prove that this world is not the best of all possible worlds.  Since practically no one says that any more, it's no longer the dramatic social satire it once was, but let's read it anyway.

I don't think I will summarize the story for you, but it's only chapter 8 and Candide has been through a lot.  Pangloss just got hanged, and Candide is thrilled to meet the girl he loves, who he thought was dead.  Cunegonde has been having an awful time and now rejects Pangloss' philosophy.

1)      Do you think Pangloss is a predatory figure or merely naive like Candide? In other words, is Pangloss deliberately trying to lead others astray or does he actually believe in the philosophy of optimism?

Oh, he's a believer, I think.  He's really convinced of his own philosophy, but he's also kind of an idiot.  He has a great opinion of his own intelligence, and he's convinced the people around him of it (I imagine them as people who want to be more sophisticated than they are, and believe that Pangloss is this great intellectual who will teach them how to be that), but Pangloss is all about the argument and has no common sense or regard for reality.  He will suffer for his philosophy, but he can't be convinced he's wrong.

2)      How do you feel about Voltaire’s writing style? Do you find this book funny or disturbing?

So far more disturbing than funny.  I'm not wild about scenes of mass rape and carnage (even after the action is over).

The Anabaptist fellow is the only one with any sense at all, so far.  And he's dead.  I liked him best.  Cunegonde may turn out to be a reasonable person; we don't know yet.


As a minor note, just as I was preparing to read this book, my daughter's math book had a problem that began "Candide and Pangloss walked to the scene of the disaster..."  and cracked me up.  Then I had to explain to the 13yo.  Her math book frequently drops in weird little references or jokes like that.
classics French literature