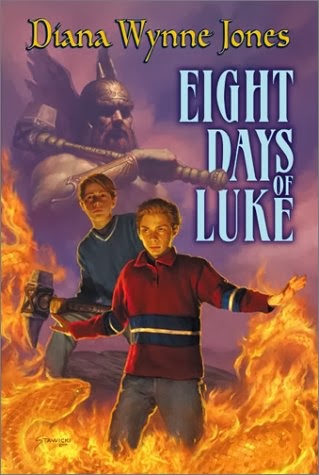 Eight Days of Luke is quite an early book, published in 1975.  I think that we'll be going through the stand-alone books in a rough chronological order, so expect a lot of 70s titles for the next week.

David spends as much time as possible at boarding schools or camps, which suits his horrible and dreary relatives who don't want to deal with him and David as well, since he can't stand his relatives.  But this summer no one has remembered to arrange anything, and David is stuck with them.  Angry and hopeless, he decides to relieve his feelings by yelling a 'curse' of made-up words--and Luke appears, thanking David for his rescue and saying something about prison and venom.  David assumes that Luke is a kid from the neighborhood, but soon notices that Luke has some unusual talents with fire.  And mysterious people keep showing up, trying to trap Luke.  David makes a deal: if he can keep Luke free for a week, his new friend won't have to go back to prison.  It's harder than it sounds.

It's a nice premise, having the Norse gods show up on their own personal days of the week.  DWJ improves on it in her own style of making it hard to tell just what is going on.  Several of the mythic elements (such as the rainbow bridge) are so subtle that I missed them for years.   I think this and The Game are the only books where she plays around with mythology so directly.