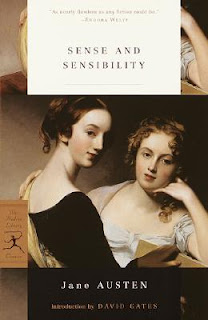 Sense and Sensibility, by Jane Austen

I just felt like I had to read some Jane Austen again, and that it had to be Elinor and Marianne.  It's hard for me to pick a favorite Austen novel (that would be like picking a favorite kind of chocolate truffle) but Persuasion and Sense and Sensibility tie for first, anyway.

Now, I know many people like Marianne best and think Elinor is a prig.  Not me.  I am on Elinor's side every time.  Who else would keep the place running?  It's not that I don't like Marianne, but she is exhausting and I really look forward to her growing up a bit (though of course I wouldn't wish her heartache on her).  Elinor has things to learn too; she falls too far on the side of denying her feelings even to herself, and at last she has to learn even to express them aloud.

This time I paid attention to the very small society that forms the girls' world.  Miss Austen lived in a tightly constricted society that, I think, was very formal because it had to be to survive.  Everyone is living in such close quarters, with little space or time to themselves.  Can you imagine spending weeks and months as a guest in someone else's home, or having visitors in your home for so long?  The careful manners and formality served to create some psychological space where there was no physical distance and little chance to find relief from the constant company of others.

Therefore Elinor spends much of her time making sure that everyone is getting along--she practices tact, couches everything she says in respectful and considerate terms no matter what she really feels, and constantly smooths over her sister's disregard for such social rules.  We might consider her to be dishonest or inauthentic, and certainly she wears a social mask--but in doing so she achieves her goals and makes sure to appreciate the good qualities of the people around her (she is surrounded by fools and enemies, but the fools at least have good points too).  She is able to live with everyone on good terms because she works hard at it, but it's better than the constant bickering and fighting that would otherwise inevitably happen.

Plus, Miss Austen is funny.  She is so funny!  I love her delicate wit.  I laughed out loud when I got to the part about Edward's reconciliation with his mother:


...Edward was admitted to her presence, and pronounced to be again her son.

Her family had of late been exceedingly fluctuating. For many years of her life she had had two sons; but the crime and annihilation of Edward a few weeks ago, had robbed her of one; the similar annihilation of Robert had left her for a fortnight without any; and now, by the resuscitation of Edward, she had one again.

In spite of his being allowed once more to live, however, he did not feel the continuance of his existence secure, till he had revealed his present engagement; for the publication of that circumstance, he feared, might give a sudden turn to his constitution, and carry him off as rapidly as before...


Now I'm in the mood to watch the movie too--the 90s one where Emma Thompson is really too old to play a 19-year-old but it doesn't much matter, and Marianne says "But Elinor, where is your heart?" and gets torn a new one.  I really kind of thought the newer one was better, but that's what I want to watch now.