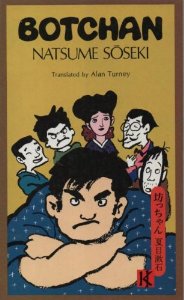 My brother gave me this a few years ago, and I should have read it before.  Botchan is a classic of 20th-century Japanese literature, plus it's quite fun.  It's frequently compared with Huck Finn in terms of its place in culture; just about everybody reads it when they're young, and it's about a young man who rebels against the system, and it's funny.  Of course it's funnier in the original language--there are a lot of puns, for one thing.

This is the cover on my copy of the 1971 translation, which I think is just great.  It really captures the book.  Most of the covers I saw online were far too serious and important-looking.

The title word means something like "young master," but with a more affectionate connotation.  The narrator gives himself no other name.  That's what his servant Kiyo calls him.

Botchan is something of a troublemaker.  He is impulsive, headstrong, and stubborn--the despair of his parents--and also straightforward and honest.  He has no guile in his character and says just what he thinks.  Only his family's old servant, Kiyo, loves him.  She has utter faith in his goodness and his abilities.  Botchan gets a job as a mathematics teacher at a remote country school, but he has a difficult time working within the system.

The various other teachers and officials at the school are all types that Botchan reacts to.  He gives them all nicknames, so that you can hardly remember their real names.  Botchan has a lot of respect for the rather elderly "Green Pumpkin," a virtuous and humble man who is treated terribly.  Two characters, Redshirt and the Porcupine, are sort of like two different destinies that Botchan can choose between.  At first he is beguiled by the pseudo-intellectual and manipulative Redshirt, but soon he is won over by Porcupine's moral strength.  Much of the plot consists of the tension between these two characters in their tug-of-war over Botchan's soul.


Redshirt laughed at this remark.  I wasn't aware that I'd said anything funny.  I'd only said what I'd firmly believed up until that moment.  When you come to think of it, the vast majority of people encourage you to be bad.  They seem to believe that, unless you are, you won't succeed in life...

This is a great book to read if you're looking for a basic classic in Japanese literature, to get your feet wet.  It's not hard to read at all, it's truly a book that everyone is familiar with, and it's a fun read.
classics TBR challenge