Some things by Solzhenitsyn 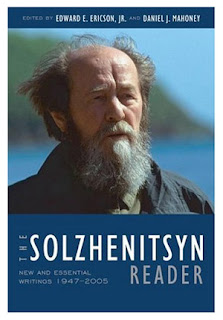 I have this selection of Solzhenitsyn's writings, and I've read the first section, so I'm going to talk about the bits I read.  There were three lyric poems as well, which I thought were very good, but I'm not going to say anything much about them.

"Besed," chapter 5 of The Trail

While Solzhenitsyn was in the Soviet prison camp for 5 years, he composed a narrative poem of over 7,000 lines, and he did it without any pens or paper.  He composed and memorized the poem with the help of a rosary that acted as a mnemonic device.  Which is just stunning.  It's an autobiographical poem in which Solzhenitsyn gives himself the name of Sergei Nerzhin.  Most of the poem has not been translated into English (as of the time this book was published), so only one chapter is included.  That's still a good long narrative, so I'm going to count this for my poetry challenge.

Besed (say BAYset) is a Belorussian village where Solzhenitsyn's unit fought in 1943, and it's the scene of this chapter.  Nerzhin is stationed in this town, which is constantly under attack from the German forces.  When he goes to confer with his superiors, he's invited to witness the execution of a Russian soldier randomly accused of collaboration with the Germans.  Even as the officials prepare for the execution, German planes threaten to bomb both the judges and the accused, rendering the whole thing pointless.  Nerzhin is horrified by the execution and is starting to realize that Marxism is not producing a more just society.

"Matryona's Home" is a pretty long story about an ex-prisoner who finds a remote country town to settle in, where he can teach mathematics to schoolchildren and live quietly.  He boards with an old lady named Matryona, who is very poor and living in a house that is falling to pieces.  Nevertheless, she works hard, not just to keep herself, but to help out all her neighbors and relatives, who call on her whenever they need an extra pair of hands but otherwise do nothing for her.  Everyone in the village is out to get as much as possible, and when Matryona dies, they do the same.  Only the ex-prisoner realizes--too late--what her worth was.

"The Easter Procession" is really more of a described memory than a story.  It's a childhood experience that made a deep impression on Solzhenitsyn, when, on Easter, a few true believers gather at the church to worship and put on the traditional Easter procession.  They are surrounded and watched by young hooligans who have no understanding of faith, but who are quite likely to start something nasty at any moment.  When the narrator hears one of the old women comment that "this is one of the better years," a relatively peaceful one, he wonders what will become of these future generations who consider themselves enlightened, but who are terrifyingly violent.

"What a Pity" is about Anna, who chances to see a newspaper article that praises her father for the engineering work he did long ago.  I loved this story so just go read it.

"No Matter What," from 1994, contains two stories that contrast and connect.  First some soldiers during World War II snitch some potatoes for a late-night meal and are caught; then a modern bureaucrat tours a once-prosperous river area that has been devastated by centrally-planned projects that were never finished and had little point in the first place.  The locals beg him to convey the importance of preserving what's left of the river, but he can only comment that the new administration won't change its mind, either--"no matter what."

I'm looking forward to reading some more from this collection.  I'm going to skip the excerpts from  In the First Circle, Cancer Ward, and the Gulag Archipelago and go on to the speeches, essays, and bits from Solzhenitsyn's really long final work, The Red Wheel.  You thought a 3-volume Gulag Archipelago and an 800-page novel were long, but no--that last one is 6000 pages on the 1917 Revolution.  Solzhenitsyn must have been one of the most prolific authors ever, I'm thinking.
history modern fiction Narrative poetry challenge