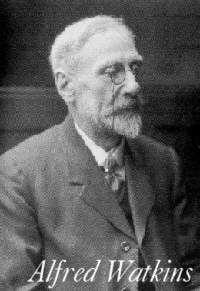 Several years ago I read a minor classic of British children's fantasy called The Weirdstone of Brisingamen by Alan Garner.  (Then I read it again and posted--very briefly--about it here.)  In the story, the children travel along an "old straight track" that is supposed to be an ancient road.  This theme is developed much further in the sequel, The Moon of Gomrath.  In the notes, Garner talks about the idea that inspired that part of the stories--Alfred Watkins' theories about old straight tracks in Britain.

In about 1920, Watkins (a businessman and local history hobbyist) theorized that there were ancient tracks in Britain, laid out along prominent landmarks and used for trade and travel.  He called these paths "ley lines" and believed that he had discovered quite a few.  The phrase "ley lines" almost certainly makes you think of New Agey beliefs about lines of power leading to special places, and that is because one John Mitchell picked up on Watkins' ideas in the 1960s and brought in the mystical theories.  Watkins himself had no such beliefs in lines of power; he was just talking about trade routes and such.  Either way, his theories about ancient trackways have fallen out of favor because Britain is so thickly scattered with ancient landmarks that you can hardly draw a line on a map that doesn't cross a few.

Regardless of whether or not Watkins was correct, I've wanted to read his book The Old Straight Track ever since I heard of it.  British archaeology and landscape is always guaranteed to grab my attention.  But I've never been able to get hold of a copy; there aren't that many in California.  I keep hoping it will appear on Project Gutenberg or something and I suppose it will someday--it's old enough.  But guess what, last week I found an earlier and shorter book he wrote about the same thing!

Early British Trackways is really a pamphlet or printed speech, not a book.  It's less than 40 pages long and was produced quite early on in Watkins' theorizing, but he had plenty to say--about tracks, landmarks, and related placenames.  I thought it was quite interesting (I realize most people would not!).  There are some photos, but they are terrible.

In many ways it's a very frustrating book to read.  Too old to have many photos or illustrations of what he's talking about, extremely detailed about Herefordshire and environs but no map given (he was talking with fellow locals), and so on.  The first thing I wanted to do was see the places he was talking about, or map them out, and there is virtually no way to do it.  I tried a bit on Google Maps, but the majority of landmarks he names are either re-named now or too small or obscure to feature.  What you would really need is those British Ordnance Survey maps, which are incredibly detailed and quite expensive.

I still want to read The Old Straight Track and see what Watkins thought.  And I want a really good map.
dodgy anthropology history