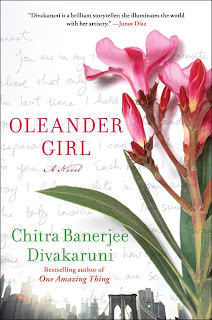 I have been looking forward to the release of Oleander Girl for a while now!  I received it the other day and I enjoyed it just as much as I expected to.  I became a fan of Chitra Banerjee Divakaruni around 1996, when my roommate Monica lent me Arranged Marriage, a collection of short stories.   I am ashamed to confess that I still have it, because we live in different states, but happily she says she forgives me.  So, thanks Monica, because I've read every Divakaruni book since then and enjoyed them all.  (Except Palace of Illusions, because I was convinced that something terrible was going to happen to the heroine--it's the story of Paanchali, the wife of the Pandavas--and I wouldn't be able to stand it, so I didn't finish even though I was loving it.  I should really fix that problem.)

Oleander Girl is about Korobi, who has grown up very sheltered in an old-fashioned Bengali family.  Her grandparents have raised her in their crumbling old Kolkata mansion, and all they've ever really told her is that her mother died giving birth to her and her father died even before that.  All Korobi has of her mother is a love letter found in a book of poetry, which has led her to spin daydreams about finding a love as wonderful as that.  Korobi's fiance, Rajat, is her perfect love, isn't he?

As soon as she is engaged, though, Korobi is thrown out of her secure world when her grandfather dies, leaving debts and old secrets behind.  She is devastated to discover how much he kept from her, and decides that she must travel to America to find out more about her past.  But it's been a long time since her mother was a carefree student at UC Berkeley, and as difficulties pile up in America and in Kolkata, Korobi has to call upon strength she never knew she had.  Her journey of self-discovery leads her to learn why her mother would choose to name her after the oleander--which, after all, is both beautiful and poisonous.

Korobi is a wonderful character and I loved her; she is so honest and determined, but vulnerable.  All the characters are beautifully drawn with their strengths and weaknesses; they are real people, not a cardboard cutout among them.  I especially liked Asif, the chauffeur, who has his own life and concerns that only a few people realize.   Everyone's difficulties are real (and serious!) but not predictable; there are several good twists to the story that kept me from getting complacent.

Kolkata is beautifully described and it's practically a character itself, so be sure to pay attention to the setting.  Overall, the setting is important to the story because so much of current events and politics invade the lives of Korobi and her family members, and I haven't really covered that here, but it adds a lot of weight to their actions.

Divakaruni is certainly an accomplished artist.  I don't have many favorite modern authors, but she is right at the top of that list, and Oleander Girl is lovely.

I received this book for free from the publisher in exchange for an honest review.  (And now I can read other reviews; I had to stay away from them until I was done writing mine!)
modern fiction