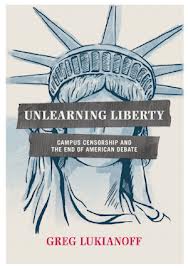 Unlearning Liberty: Campus Censorship and the End of American Debate, by Greg Lukianoff

I've been way behind on my posts lately, which is fine except that I want to tell you lots of stuff and this way, by the time I write the post I've forgotten too much.

Well, this book came out very recently and I happened to see a video interview with the author online.  I've followed some FIRE things before and I knew I needed the book immediately!  Luckily it had just been purchased at work and so I got it right away.

Lukianoff is a lawyer who has specialized in the First Amendment.  He is part of a small group called FIRE: The Foundation for Individual Rights in Education, which is active in helping students and faculty who have had their First Amendment rights infringed by their universities.   You can visit FIRE and see the sort of thing they do here.  It would be lovely if FIRE was not needed in the higher education world, but oh my it certainly is.

In theory, public universities ought to be bulwarks of free speech in America, allowing students and faculty to discuss issues without fear of punishment, develop strong logic and debate skills, and generate new ideas that will benefit society.  In practice...well, it's not the free and open forum we might like.  On far too many campuses, speech codes restrict what people can say, speech is limited to small "free speech zones" that often have to be reserved in advance (!), students and faculty are censored or punished for what they say (especially for criticizing administration, because codes constitute an awful temptation), and an atmosphere of political correctness encourages students to self-censor for fear of retaliation.

Lukianoff documents all sorts of cases: a student expelled for protesting a parking garage building project on Facebook, students harassed by administration for passing out little flags, residence hall 'education' programs that attempt to enforce opinions and demand answers to intrusive personal questions, freedom of religion infringed, and issues with freedom of association in campus clubs.  It's really depressing, and particularly highlights how speech codes can be used to oppress people and to unfairly punish those who dare to disagree with administration.

Something that is really concerning about these trends on campus is how our younger generation is absorbing the lesson.  It turns out that if we teach kids that only some opinions are OK, or that they cannot speak freely, then they get the idea that censorship is fine.  In fact, it might actually be good and heroic to censor incorrect speech!   And so we get ever more enthusiasm for shutting down debate.  Students have been stealing campus newspapers for years when pieces appear that they don't like, and now it's gotten so common that people are doing it for any old reason.

This book is fascinating.  I could hardly put it down.  In my opinion it's an important book and we should all be discussing these issues.

I was in college in the early 90s and I remember the early days of political correctness very well.  Conservative commentator David Horowitz came to campus to speak and was not allowed to address his audience when students shouted and screamed so that he could not be heard.  That was shameful behavior at a college that claims to be the birthplace of the Free Speech Movement--but the precedent has been zealously followed and happens all the time.  Such behavior has become unsurprising.  Some of the cases documented here, however, are completely shocking.  I have a hard time imagining us putting up with some of these abuses, even in the name of political correctness.  I think, though, that we allowed it to happen somewhat with us, and it's a slippery slope....

One conclusion that you can reach from Lukianoff's arguments is that an open society requires skills that we are not allowing ourselves to develop.  If we cannot handle listening to other opinions, develop solid reasoning for our own opinions, or allow others to say things that we don't like, then our public discourse is going to decline--and so will our society.  Disallowing free speech does not result in everyone having 'correct' and informed opinions; it means that many people in the majority cannot explain themselves and get angry when asked to do so, and people with minority opinions keep quiet out of fear of punishment.

These skills in open discourse take practice, which means we have to put up with listening to a lot of dopey and/or offensive nonsense on campus and in life.  College students aren't necessarily going to be good at debate and thinking and listening to others, but that's partly because we severely restrict speech all through K-12 education too.  Granted, free speech in high school means letting a whole lot of ill-informed kids spout a whole lot of nonsense in the school paper (oh, yay, yet another awful column on drug legalization/gun control/abortion), but I can't think of another way for them to learn other than practicing.

Free speech is hard, and Lukianoff is great at pointing that out.  It goes against human nature to allow others to have their own opinions.  The first thing we want to do when we hear something we don't like is to shut it down and make sure we never have to listen to it again.  It's also hard to put our opinion out there and be willing to take the criticism that will result; free speech requires a thick skin.   We have to constantly remind ourselves that the principle of free speech is more important than our feelings of offense, and more important than making everyone feel good about themselves.   Free speech is the mechanism by which we develop new ideas and figure out whether they are any good or not.  Open debate is how we try to find truth.  It is a tool to develop a better society for everyone.  But it's a very messy tool indeed.

So, do me a favor, and today, listen to an opinion you don't like.  Give it a fair hearing and refrain from name-calling, screaming, or taking offense.  Then go out and express your opinion.
Posted by Jean at 6:36 PM

Labels: books everyone should read, politics

Interesting! I'm really interested in the way the educational system -- K-12 education as well as the universities -- handle issues of free speech. Does Lukianoff talk much about universities that are doing it right? Like really really promoting free speech everywhere and being awesome?

Wow, you're fast! He does express admiration for Yale--until 2009, when some icky stuff started happening, but Yale mostly gets good press. (Harvard, no.) Otherwise this is mostly a book about the bad parts.

If you visit the FIRE website, they rate every university in the US according to its handling of free speech. Green ratings are few but they do exist, so they do approve of some schools. :) (Private schools that openly value other things above free speech earn non-ratings and are pretty much ignored.)

If you still have the book, I'd like to borrow it.