Autobiography of an Ex-Colored Man 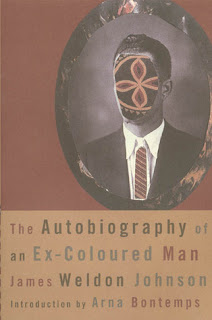 Autobiography of an Ex-Colored Man, by James Weldon Johnson

It's been a while since I read this novel, and now I don't have as much to say about it as I should.  This is an early African-American novel; it was first published anonymously in 1912 and didn't make much of a splash.  At that time, novels about black culture and experience did not sell as well as memoirs and autobiographies, which did very well indeed, and that may have been partly why it was written and titled as a memoir.  It was re-published in 1927 to much more acclaim, and by that time Johnson was quite well-known.

The story is written as if it were a memoir.  The protagonist does not name himself at all, telling his story from the first person and never revealing his name.  He writes his story simply.  As a young boy his mother raised him carefully and trained him in music, and he only saw his white father once or twice.  He plans to go to university, but ends up working instead.  He falls into low habits but then learns to play ragtime, and becomes a popular performer, even touring Europe with a patron.  He returns to America with musical ambitions, but gives them up in order to pass as white.

The dilemma of his life is that he has to choose between an easy but mediocre life as a white man, or a more difficult life as a black man with the ability to use his talents to the fullest.  By denying his true nature, he also denies his own best abilities; but there is no going back once he has made the choice.

I'm not doing the book justice, really,--for one thing I don't want to give away the whole story--but it's very good and I would recommend it.  I'm glad I got the chance to read it.