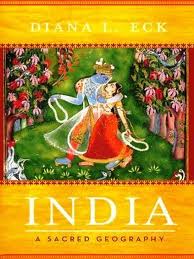 I took a very long time with this book--I think I started it at the new year.  Eck tackles Hinduism: a fascinating religious system that is so vast, ancient, complex, and variable that it is impossible for any one person to even come close to fully understanding it.  Here, she focuses on the geographical nature of Hinduism, which is (as you would expect) deeply rooted in the landscape of India.  Every mountain, river, city and village has its special story, and pilgrimage--visiting spots connected with certain stories-- is an important part of Hinduism.  Pilgrimages may range from day-trips to local places to long journeys like walking the entire shoreline of a river, visiting linked places around the country, or even circling all of India on foot.

(I had not realized that pilgrimage was such an important aspect of Hinduism.  Right after I started this book and began to learn about Hindu pilgrimage, I watched a Bollywood historical movie in which the Moghul emperor, a Muslim, rescinds the pilgrimage tax for Hindus.  This results in an outpouring of joy that would not have made a ton of sense to me if I hadn't already started reading about it.)

Eck devotes each chapter to a different sort of place you can visit.  First, we see the Hindu vision of the universe and India's place in it.  Then we learn about:

Rivers--the Ganges (Ganga) and all other rivers too.  Some fascinating information about river pollution is here too.

Shiva and places of linga worship.  A linga is an image of a pillar of light from which Shiva emerges, and also something of a fertility symbol, but not quite like you would think.

Krishna--his story is acted out on Indian geography.

The events of the Ramayana in India.

....and finally, a chapter on modern Indian pilgrimage.

These chapters are fascinating but quite difficult to read; Eck is describing practices and beliefs that are not easy to understand for most Westerners.  I have a bit of a thing for India and a passing familiarity with Hinduism, but it was hard going.  There is a ton of difficult vocabulary and names that are hard to remember.  I really wished for more pictures; there are very few and Eck was constantly introducing some famous temple or destination or goddess with a description, and my first reaction was always that I wanted to see a picture.  So then I would have to Google it and dig through piles of images until I found what I was looking for.  The result was that I often couldn't read more than a page or two without stopping to spend 10 minutes on the computer.  Thank goodness I have a tablet so I could stay on the couch.  This is not a book to read in bed; you have to study it.

So, it's a great book.  Don't let me scare you off if you're interested.

Eck also spends some time on the modern Hindutva movement, which she is clearly very concerned about.  Hindutva is a fundamentalist, nationalist Hindu movement.  Adherents want a completely Hindu India, and they are often violent.  I think that's a valuable part of the book (though I am less impressed by Eck's leadership in the movement to oust Subramanian Swamy from his teaching position at Harvard because he wrote a piece for an Indian publication in which he espoused some Hindutva ideas.  Eck is quoted as saying, "There is a distinction between unpopular and unwelcome political views."  So much for free speech as far as Eck is concerned).

It's a valuable, difficult, and interesting book.  And it needs a whole lot of pictures--preferably in color.