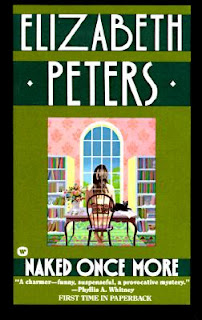 Naked Once More, by Elizabeth Peters

Jacqueline Kirby is back, in her final adventure!  (Unless Elizabeth Peters decides to write one more?  Maybe?)  I don't think I have read this one before, except that the cover looks awfully familiar...but I remember reading all the other Jacqueline stories and not this one at all.

Jacqueline gave up being a librarian when she discovered how much more money she could make by writing best-selling historical romances, even if she poked some fun at them while writing.  Now she's on the short list to be chosen to write the sequel to the amazing best-seller Naked in the Ice--a cross between Clan of the Cave Bear and Kingdom of Thrones, it sounds like.  The author, Kathleen Darcy, disappeared seven years ago and has been presumed dead.

Jacqueline is trying to figure out just how to write the sequel to one of the greatest romances ever written, but Kathleen's mysterious fate keeps distracting her, and suspicious accidents are happening, just like they did before Kathleen disappeared.

Tons of fun, as you would expect from a Jacqueline Kirby story.
mystery