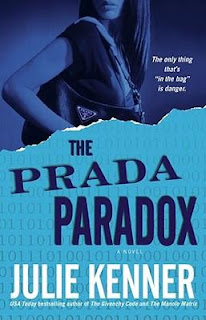 The Prada Paradox, by Julie Kenner

I have a whole pile of books to tell you about!  I've been sick, so blogging has been neglected, but I've read a bunch of books--nothing too heavy, though, since my brain hasn't been working very well.

The Prada Paradox is the third in the trilogy that started with The Givenchy Code, in which a mysterious someone takes the hit video game Play.Survive.Win into the real world.  This time, things are a bit different; Devi is a movie star who has the lead role in the film version of Givenchy Code--a project that Melanie hopes will help other victims step forward and maybe solve the mystery of who's running this thing.  A few weeks into filming, Devi is drawn into the PSW game for real, and her designated assassin is a deranged fan who has terrorized her before.  The clues are, of course, movie-related and take Devi all over Los Angeles.

It's a fun and clever thriller that finishes off the trilogy nicely.