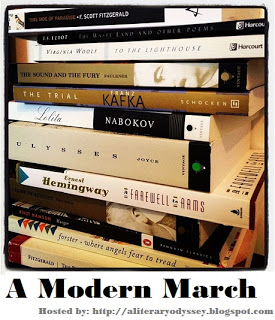 I wanted to read this poem in the same way that I read "The Waste Land."  I found an annotated version online, read it through once, then read it while checking every annotation, and finally read it once more while trying to keep all that in mind.

"The Hollow Men" draws from four different sources: Dante's Divine Comedy, Conrad's Heart of Darkness, Julius Caesar, and the Gunpowder Plot of 1605.  As in "The Waste Land" (and probably every other serious poem he produced),  Eliot writes in a densely allusive way that requires a lot of study to begin to grasp.

It seems to me to be a lament for the modern man--Eliot sees himself and others as lacking in substance, with no more depth or soul than a scarecrow stuffed with straw.  As they die, these men cross over to the next world, but are prevented from going anywhere much because they failed to make a choice; they lived as shadows and will continue to do so in Limbo, having rejected anything so decisive as salvation or damnation.