The Pope Who Quit 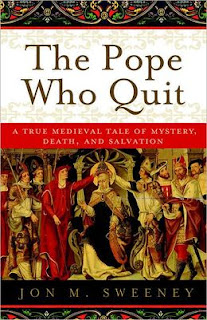 The Pope Who Quit, by Jon M. Sweeney

This has been my gym book for a little while now and it turned out more timely than I expected!

A bit over 700 years ago, a Pope quit his job and walked away, after just 5 months.  His action sent shockwaves through the Christian world--could a Pope even do that?  But it was also a relief, because Celestine V was not suited to the position at all.  Sweeney documents the whole story, and then some.

Peter Morrone, the man who became Celestine V, was a dedicated ascetic monk.  Like Simon the Stylite and other hermits, he longed for a life of solitude and difficulty dedicated to prayer and contemplation.  In his middle years he founded a new religious order of hermits, but he always wanted to get further away and live even more ascetically.  By 1292, he was living in a cave at the top of a rugged mountain and always trying to get away from the monks who followed him up there.

When cardinals failed for over two years to elect a new Pope, Peter wrote a letter castigating them for their politicking and stalling.  The letter triggered an "election by inspiration:" although Peter was not one of the candidates, he was suddenly nominated and elected Pope by acclimation.  At this point, Peter was over 80 years old and still living in a cave, so everyone rushed over to find him.  He wanted to run away, but was trapped.

Peter became Celestine V.  Unfortunately he was unprepared and unsuited to be a Pope; he was an extremely introverted (and fairly grumpy) man who had no idea how to engage in the politics and bureaucracy that surrounded the Papal throne.  He was under the sway of King Charles II of Naples, and he just wanted to live in a hut.  Within a few months, it was clear that this was not working.  Celestine was offered an out by Cardinal Gaetani; it would be legal for him to abdicate.  With relief, Peter walked away from the papacy...and guess who was elected Pope?  Gaetani took the name Boniface VIII, and as any sensible Renaissance politician would do, he promptly ordered Peter captured and imprisoned. Peter died about a year and a half later, still in prison.

It's a melancholy story.  I don't know if it's worth a whole book; I did feel that Sweeney padded a bit with explanation and background, but maybe others would be happy to have so much background.  Sweeney also speculates on the possibility of Pope Benedict XVI's abdication, and concludes that it's unlikely.  Heh.

I liked it fine, but thought it a tad over-long.