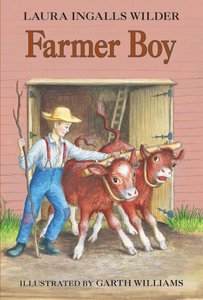 I bet I am not the only person who loved the stories about Laura and Mary, but always skipped Farmer Boy out of a conviction that it would be boring.  Well people I WAS WRONG.  Farmer Boy is fantastic.

This story tells about a year in Almanzo Wilder's life as a boy--from age 9 to 10.  His parents own a farm and are well-to-do; they are also careful, thrifty, and hard-working.  Almanzo is now old enough to go to school, but most of the time he would rather be working with his father, especially if it involves horses.  There are some great stories--how the mild-mannered schoolteacher deals with a pack of tough young men who pride themselves on breaking up the school every year, how Almanzo trains his team of young oxen, and what happens when the parents go on a ten-day visit and leave the children in charge of the farm.  Oh, and there's a great chapter about returning a lost wallet.

What really struck me about the book, though, was the differences in attitudes--and how much the author emphasized certain values.  This story has a message that is pounded home several times, about the value of independence, self-reliance, and solving your own problems (not to mention personal responsibility and hard work).  What kind of person did Almanzo and Laura Wilder consider to be the ideal American citizen?  It's all right here.

Near the beginning, Almanzo goes out to cut ice from the river with his father and the other men.  He is just watching the ice being cut, and walks up to the hole--and then he slips off the edge.  If not for a man who grabs him at the last second, he would have died.  His father runs up and:


Father stood over him, big and terrible.
"You ought to have the worst whipping of your life," Father said.
"Yes, Father," Almanzo whispered.  He knew it.  He knew he should have been more careful.  A boy nine years old is too big to do foolish things because he doesn't stop to think.

To me that is a startling attitude, that a nine-year-old would be expected to think before he does something dumb.  I would love to see it, but perhaps you have to be living in a more dangerous world than we do to have it. Time and again, Almanzo's father leaves him to solve his own problems and do large jobs of work on his own.

At the end, a wheelwright in town offers to take Almanzo on as an apprentice, which would give him a good trade and a comfortable life.  His mother is horrified; it's bad enough that her older son wants to be a storekeeper, and now Almanzo too?  His father says:

"Well, son, you think about it.  I want you should make up your own mind.  With Paddock, you'd have an easy life, in some ways.  You wouldn't be out in all kinds of weather.  Cold winter nights, you could lie snug, in bed and not worry about young stock freezing.  Rain or shine, wind or snow, you'd be under shelter.  You'll be shut up, inside walls.  Likely you'll always have plenty to eat and wear and money in the bank."
"James!" Mother said.
"That's the truth, and we must be fair about it," Father answered.  "But there's the other side, too, Almanzo.  You'd have to depend on other folks, son, in town.  Everything you got, you'll get from other folks."

"A farmer depends on himself, and the land and the weather.  If you're a farmer, you raise what you eat, you raise what you wear, and you keep warm with wood out of your own timber.  You work hard, but you work as you please, and no man can tell you to go or come.  You'll be free and independent, son, on a farm."

The Wilders wanted to leave readers in no doubt about what life was best.  An independent life, accountable to no one, was better than a life in trade, no matter how hard it was.  When you know what the Wilders went through in their own farming life, which was nowhere near as prosperous as the one described here, it is pretty mind-boggling.  Indeed I seem to recall that as a young woman Laura always swore never to marry a farmer because she didn't want to be poor all her life, and then she did anyway, and was in fact poor for much of the time.  And she put this in anyway.  Wow.
children's literature classics