Death of a Harvard Freshman 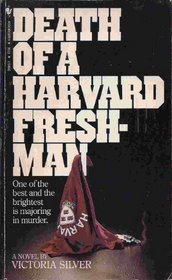 Death of a Harvard Freshman, by Victoria Silver

I picked up this semi-trashy mystery in the student study center while waiting for a meeting to start.   It was on a bookshelf where you can leave or take a book, that sort of thing.

Here we have Lauren, a freshman at Harvard who is taking a small seminar on the Russian Revolution.  She and her fellow students do not seem all that bright, nor do they spend a whole lot of time studying, so I don't know why Silver set it at Harvard except that she must have liked the scenery.  Instead they spend all their time scoping each other out, gossiping, or taking drugs.  Anyway, one day the seminar discusses the death of Rasputin, and that very night Lauren's favorite crush, Russell, is murdered in a suspiciously similar fashion.

Lauren is the only one who knows that the murderer must be one of the 9 remaining students in her seminar.  Who could it be?  And why was he killed?  She must investigate every single student to find out!

I was surprised to see that the story was published in 1984; I had guessed the late 70s.  Close enough, I guess.  It's not a bad mystery, but there is way more about various students' physical charms and about regional stereotypes than there needs to be.  (Yes, California people are all blond and tan and effortless, but utterly shallow and useless.  New England people are uptight WASPs, even when they're not WASPs.  And New Jersey---well, there's nothing good about New Jersey.)
mystery