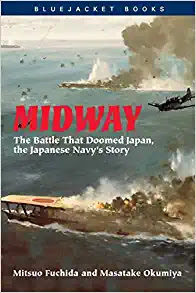 Midway: The Battle That Doomed Japan, by Mitsuo Fuchida and Masatake Okumiya

After I read Thirty Seconds Over Tokyo, my brother informed me of the existence of this book, so I borrowed it.  While I love reading history, and I'm fascinated by lots of things around war, I'm not much on reading the actual military war part with battles and weapons.  As a result, I'm somewhat ignorant; I've hardly ever heard of famous war books like Thirty Seconds, or this one, and a month ago I could not have told you about the importance of the Battle of Midway.  Which was pivotal!

Mitsuo Fuchida, the main author, explains himself as a naval aviator.  After being badly injured at Midway, he went to teach at the Japanese naval academy and was asked to write up an analysis of the battle for his superiors -- the truth of which had been covered up in Japan.  He was given access to secret documents, wrote the analysis, and the copies were sent off.  In the Japanese surrender, all these documents were burned so as not to fall into American hands.  Later, Fuchida found his manuscript copy in a footlocker, and that was all the documentation there was any more.  He wrote this account with the help of Okumiya, who was also at Midway, and it was published in Japan in 1951.  It was translated and published in the US in 1955, and became a classic of naval literature.  But it wasn't written for an American audience; Fuchida is writing for his own country and that isn't changed in the English edition.  There are plenty of footnotes to help the reader.

Fuchida starts with a summary of the war in the Pacific and an account of the decisions leading up to the bombing of Pearl Harbor.  It's only when he starts the account of the day itself that he reveals that he led the bombing attack.  On Pearl Harbor.  So that was quite something to absorb.  We then proceed to six months of easy victories for Japan and the process that led to the decision to attack Midway Island.  They thought it would be another easy victory; intelligence had assured them that Midway was not heavily defended, and they wanted to draw out the American forces for a battle.  But they assumed that those forces would not arrive until after they'd taken Midway.

The American fleet, however, was waiting for them, and despite the superior firepower on their side, it was a devastating defeat for Japan.  Fuchida was not taking part in the air attack, because he'd had his appendix removed, so he was a witness to the attack on the Japanese ships.  He describes it all in detail -- it gets a bit confusing because he does it from three different viewpoints -- and then analyzes what went wrong.  He also has a lot to say about the importance of aircraft carriers vs. battleships, and ends up with a conclusion that the Japanese national character contained defects that led to defeat.  (I have a slightly different opinion on that point.)

I had to look up the details about battleships vs. destroyers; I didn't know enough.  Battleships are no longer part of a modern naval fleet, but in WWII they were still important, and Japanese naval officers considered them to be the backbone of the fleet (which turned out to be a mistake).  A battleship is the direct descendant of the giant sailing ships with cannons, as in what Nelson commanded.  It's a giant ship that carries heavy gunnery with which to shoot at other giant ships.  Once airplanes got involved, they kind of turned into sitting ducks.  Japanese battleships of WWII had 'pagoda masts,' because their central towers had been so built up with observation decks, guns, and antennae that they looked like they were carrying a temple onboard.   A destroyer, however, is a small, fast ship that is built to take down torpedoes before they can hit the battleship or carrier.

I also noticed that a lot of Japanese ships were named Something Maru.  This was familiar from Star Trek's Kobayashi Maru, but what did it mean?  Turns out 'maru' means circle and Japanese sailors have traditionally liked to use it in ship names, but nobody is entirely sure why, so there are several theories.  Maru is also a popular cat name (Spot?), and there is a world-famous Maru who loves to jump into boxes.

OK, so, the Doolittle raid was indeed a blow to the Japanese military leadership; they were horrified that Tokyo -- the home of the emperor -- could be hit.  That helped them decide in favor of attacking Midway, but according to Fuchida, they made several crucial errors.  The worst one was overconfidence; it simply did not occur to them that the attack might not go the way they expected, and that American forces might be there to meet them.  They also had no radar at that time, and the fleet was spread out in different locations, dissipating its strength.   The Midway defeat was the pivotal moment of the war in the Pacific; though it would drag on for over three years more, the crucial event took place only six months in.

The fighting services, especially, were imbued with the idea that their foremost duty was to protect the Emperor from danger.  Naturally, they felt that it would be a grave dereliction of this duty if the Emperor's safety were jeopardized by even a single enemy raid on Tokyo. (91)

In point of physical damage inflicted, it was true enough that the [Doolittle] raid did not accomplish a great deal.  But the same could not be said of its impact on the minds of Japan's naval leaders and its consequence influence on the course of the war at sea. (97)

Basically, the trouble lay in the fact, pointed out earlier, that the Midway plan rested on the obsolete concept, still dominant in Combined Fleet Headquarters, that battleships rather than carriers constituted the main battle strength of the Fleet.  Instead of employing the battleships to screen and reinforce the carriers, it was the carriers which were placed in the supporting role.  The fallacy of this concept was to be driven home with tragic force. (127)

Motionless as a statue, Admiral Yamaguchi watched the orderly take-off, led by a man who knew that he would not return [due to a broken gas tank].  Every spectator stood grim and silent, crushed by this cruel aspect of war which allowed of no human feeling. (229)

It must be remembered that the people of Japan are not by nature suited to mass production work.  The individual is much more inclined toward craftsmanship than toward the assembly line...

Sorry I've written this whole novel here.  I found this account difficult to read, because I'm terrible at reading about war -- I read a couple of paragraphs, realize I have no idea what it said, and have to go back.  It's very hard to be interested in descriptions of these things, and it's even more difficult to look at the whole thing from the opposite point of view.  But I learned so much about a whole lot of different things, and that was great, so I do highly recommend this book.

Another fascinating look at the war from the Japanese point of view, if you're interested, is The Wind Rises, Miyazaki's film about the man who developed the Zero.  It's somewhat fictionalized, not a historical account, but it's a breathtaking movie:  Jiro dreams of flying and designing beautiful airplanes, inspired by the famous Italian aeronautical designer Caproni. Nearsighted and unable to be a pilot, he becomes one of the world's most accomplished airplane designers, experiencing key historical events in an epic tale of love, perseverance and the challenges of living and making choices in a turbulent world.

amanda @ simplerpastimes said…
I guess I'm not much into war history, but reading about WWII from the Japanese perspective certainly would be interesting. I'll second the The Wind Rises recommendation - despite the fictionalization, I think it's the best bio-pic I've ever seen. So beautifully well done.
April 17, 2021 at 12:34 PM

Maphead said…
Might have to give this a shot. Always been interested in the battle.
By the way love the new format. LOVE the cartoon of the howling frog!!!!
April 21, 2021 at 12:14 PM