The Defiant Agents and Key Out of Time (Time Traders 3 and 4), by Andre Norton

I got so into the Time Traders books I read in January that I went ahead and got the next two, which kept up the excitement. 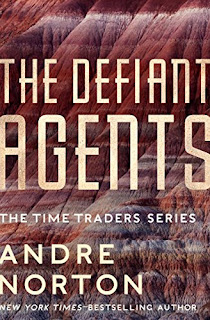 The Defiant Agents: Travis Fox, Apache rancher and accidental time agent, has gathered a whole team of tribal members for an expedition to explore the planet Topaz.  It was once part of the now-vanished alien empire, but nothing else is known about it, except that they're trying to beat the Russians there.  Everyone in the ship will be put into suspended animation, and the explorers will be given a new treatment that will awaken genetic memories from the past, rendering these scientific experts more skillful in survival and teamwork.  Plus they have enhanced psychic wolf companions!

They do not beat the Russians to Topaz, and so the ship is shoved off-course and crash-lands.  Travis Fox and his teammates awaken with little idea of what is going on, but they survive and begin exploring with the wolves' help.  They find that the Russians have had pretty much the same idea; they've got a group who have been treated to access their Tartar genetic memories, but those people are held in slavery by a few overseers, who have alien technology that forces anybody close by to do their bidding.  The only escape is to get far enough away.  So the Apaches and the Tartars form an uneasy alliance, determined to break the overseers' technological hold and live in freedom.  And, Travis finds, it's absolutely essential that no one else ever find the alien ruins on Topaz, because they hold destructive power that is just too dangerous. 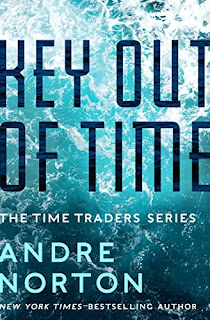 Key Out of Time: Ross Murdock, former delinquent, Ashe (his mentor) and a new agent, Karara (who works with enhanced psychic dolphin companions), are exploring Hawaika, another unpopulated planet once run by the alien empire.  It's mostly tropical ocean, but ten thousand years ago there was more land; what happened?  They plan to go find out, but a storm pulls them all through the time gate unexpectedly.

They find three sentient races on ancient Hawaika, and the aliens are using a divide and conquer strategy, pitting the various peoples against each other before coming in to take over.  Ross and company find a few allies, and start wondering if it might be possible to change the course of history.  What if they defeat the mysterious and powerful aliens?

Both stories end with their characters accepting that they are not going to get to go home.  There is no way to get off Topaz; there is no way to get back from ancient Hawaika; and both Travis and Ross look forward to building good and useful lives where they are.  It seems Norton ended the series here, at least until 30 years later, when she wrote a story about Ross dealing further with the aliens on Hawaika.  And it looks like there are a couple of stories after that, written much more recently.  I think I'll read #5 for sure -- I want to know if they can defeat the imperial aliens -- but I'm waffling about the others.

Fun and exciting stories.  I should have read Norton as a kid!