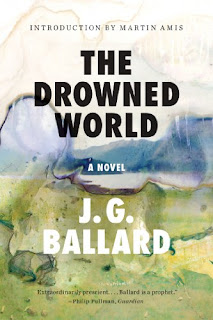 In 2145, decades of solar flares have melted all the ice on earth, drowning cities and leaving most of the world uninhabitably hot for humans.  Dr. Robert Kerans grew up in the 85-degree Arctic circle among what's left of the world's population; now he's a scientist with an expedition to explore an old, flooded city to see if it can be rendered usable again.

The drowned city now has only some tall buildings poking up from the water, and enormous plants grow everywhere.  Solar radiation has changed plant life, rendering it Triassic in character; everywhere, both plants (and reptiles too) are huge and tropical.  The world seems to be regressing into the far-distant past; humans and other mammals are on their way out, and reptiles are taking over.

Soon the heat and ancient atmosphere are affecting the crew with dreams and hallucinations.  The psychologist Dr. Bodkin theorizes that everyone is experiencing the surfacing of ancient genetic memories of Mesozoic ancestors.  The expedition has to pack up and leave, but  Kerans, his not-quite-girlfriend Beatrice, and Bodkin elect to stay behind and immerse themselves in the "archaeopsychic" life.

Their peaceful, even slothful lives of dissolving into heat and swamp are interrupted by the arrival of Strangman, leader of a crew of professional looters.  He collects jewels and gilded objects, despite the fact that their worth is obviously gone.  The looters' violence, noise, and greed destroys the placid decay of the lagoon/city and threatens the three's immersion into the past.  Something's gotta give, and nobody here is sane.

The Drowned World was published in 1962 and is still considered a major classic of "climate fiction."  Ballard also wrote The Burning World, about a world where the water is gone, and The Wind From Nowhere, about global hurricane-strength winds.  They're not a trilogy, but they're often read and referenced together, and I have The Burning World now.

It's a pretty interesting story (though I certainly cannot fathom why anyone would choose to live in a 120-degree swamp) and worth reading as a classic SF novel.

I borrowed this book from my kid, who gave me a bit of warning that it was kind of racist in places.  I was a bit surprised, since we both like to read old books and that comes with the territory.  But then I got there, and...yeeeeaahhhh, I understood why.  I have never read Joseph Conrad's Heart of Darkness, but I sure thought about what I've read of it.  I'd say that Ballard was directly referencing Conrad, and that Strangman is his Kurtz.