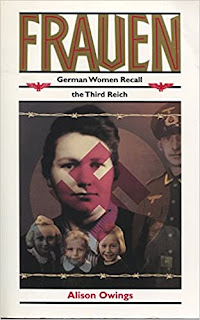 We all owe Alison Owings a debt of gratitude for the work she did.  In the mid-80s, she realized that there were all these elderly German ladies, and nobody had ever really asked them about their experiences in World War II.  People interviewed German men, and survivors, but what about the women who had lived through the war, who had experienced life under the Third Reich?  What had they thought, done, believed?  Owings spent several years finding and interviewing an enormous variety of women, and put 27 of those interviews together into this book.  That generation is gone now, and I hope other people thought of asking them about their experiences too.

Each lady gets a chapter, and tells her story, partly in her own words and partly through Owings' eyes, as she observes tone, body language, and so on.  Sometimes there is a sister or daughter to supplement, sometimes even a gathering of women with differing opinions.  Owings also explains the lady's particular dialect or accent, and provides wider context.  This makes it easier reading than Svetlana Alexievitch's more minimalist 'collage' technique which takes her almost entirely out of the picture.  I could see, in imagination, Owings sitting in many tidy little parlors, having coffee and cake with the ladies and listening to their stories.

They vary widely, the ladies.  They were reluctant, or enthusiastic members of the BdM, or they ducked out of it entirely.  They had careers, or children, and one was a camp guard.  One woman hid her best friend, several gave food where they could, others said they never knew about the camps until afterward.  More than one lost a disabled relative.  A couple were devout Communists who lived in East Germany, a few had Jewish ancestry or relatives, and one Jewish woman spent time in a labor camp but survived.

It's not a super-easy book to read -- for one thing, it's about 500 very dense pages -- and each woman's story needs absorbing.  So I've been working on it for a while; I could only read one or two at a time.  There are no easy categories or answers.  I recommend this book highly -- it's not at all well known enough in WWII literature, and I don't think it's in print, but it's not expensive.  What it is, is an important record.

The late Reinhard Bendix, a Berlin-born survivor and sage...said in a seemingly casual way, his brown eyes looking not quite accusatory, "I do hope your book won't make Americans feel smug."

This book reminded me forcibly of my own very small experience.  I've mentioned before that I spent a year in Denmark as a high-school student -- this was in 89-90, so I was close by for the fall of the Berlin Wall, which was exciting.  My host dad was German, and we would go on trips to visit his mother and relatives.  His father had died about 15 years before, his health permanently wrecked by his time in the Wehrmacht.  Just after the war, the family had survived on the largesse of American troops, and I'm not sure how much 'Opa' was able to work.  I knew this in an academic way, but the first time we went to visit, I was stunned to see Oma's wedding picture on the wall; with, of course, Opa wearing his military uniform with swastikas on it.  It was a visceral shock for a very clueless American teenager.  I have no idea whether Opa was a willing participant, or if he was drafted; World War II was not a topic that was really up for discussion in our Danish household and I was too shy to ask where he fought or what he thought about it.  (We visited Munich, but nobody ever mentioned that Dachau was right there.)  I don't know what Oma's experiences were, except that I think she may have sewed for income.

You know, I sure wish I had read this book back when I bought it -- in 1995, at Black Oak Books in Berkeley, just a couple of years after it was published.  I hadn't realized that several of the people in it were right there in town at the time -- including, I think, the author.