Breaking Bread With the Dead 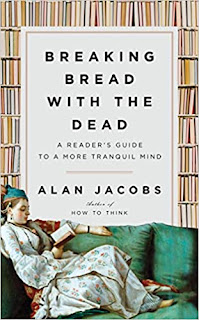 Breaking Bread With the Dead: A Reader's Guide to a More Tranquil Mind, by Alan Jacobs

I quite like Alan Jacobs and have been following his blog, Snakes and Ladders.  I only ran into him a couple of years ago when I read his book, How to Think.  Evidently he's doing a sort of series of that, this, and The Pleasures of Reading in an Age of Distraction, which I have not read.  Here, Jacobs lays out his reasoning on why old books is a good idea, and important to do.  With me he's pretty much preaching to the choir, as a look at Howling Frog will show, so the question is, was it worth reading as an already convinced old-book-reader?

Jacobs starts by acknowledging that reading old books is often painful.  Yes -- old literature is frequently racist, sexist, or just plain alien.  Why should we even subject ourselves to reading difficult or ugly or incomprehensible books when there are plenty of less painful books to read that we can more easily understand and agree with?

Well, maybe because it is difficult and alien.  These people were all human beings too, just like us except born in other times.  There's a lot to learn.  Jacobs wants us

sitting at table with our ancestors and learning to know them in their difference from, as well as their likeness to, us.

They had their blind spots, and, crucially, we have ours.  It's easy to point theirs out from our perspectives; much harder is the work of learning what they knew that we do not.

It's a short little book, and I encourage you to read it.  I enjoyed it and got many new thoughts from it, new reasons to read old books.  I don't want to lay out the whole argument here, but here are some things I marked:

Again: we should judge characters from the past in precisely the same way we judge characters of our own time, according to whether we think their behavior is good or bad, virtuous or vicious...My problem with the disregard of the past that we typically manifest today is that we are highly selective in what elements of a historical person's character we are willing to take seriously.  We tend to consider only those elements that reflect the dominant concerns of our moment, which are not the only concerts that are relevant to human judgement....we behave...rather alike admissions officers at elite colleges and universities: we look for ways to send them to the reject pile.

[On Levi-Strauss' paradox of civilization] Nothing is more intrinsic to human nature than the desire to believe that benefits can and do come without costs, that we can fix certain problems without introducing new ones.  We certainly don't want to admit that to those who would oppose productive change, lest we give them leverage to argue that the change shouldn't have been made at all.

[Quoting Chesterton]...argued that we have the whole of history available to us as our rightful inheritance, and that "the mind of man is at its largest, and especially at its broadest, when it feels the brotherhood of humanity linking it up with remote and primitive and even barbaric things."

Breaking bread with the dead is not a scholarly task to be completed but a permanent banquet, to which all who hunger are invited.

[Quoting Patrocinio Schweickart on reading a book which you enjoy, but which is objectionable...do you stop reading?  Simply give in to the ideology?]  Instead, she suggests, you should look for what she calls a 'utopian moment' -- a moment when something deeply and beautifully human emerges from that swamp...the 'authentic kernel,' something perhaps hidden deep inside the book that speaks to you, that articulates an experience you can share.  From this point on you read in a double fashion.  You don't silence the part of you that sees the problems with the book, its errors, its moral malformations; neither do you silence the part of you that responds so warmly to that 'utopian moment.'

I want to argue that the response Le Guin* and Rhys** make to their predecessors in storytelling is best described as generous....Generosity, for Fitzpatrick,*** is both habit and deed, but above all an ongoing disposition...that arises from a kind of hope.  You are generous toward someone else -- you give them more of your attention than you may at certain moments feel that they deserve -- because you hope that something good will come of it.  At the very lease you hope for an expansion of your own understanding...

...there is something also to be said for that moment when a figure from the past, who has perfectly anticipated something you already believe then turns around and says something that puzzles or alienates you.  That is, I firmly believe, the greater moment of enlightenment: the moment of double realization.  To confront the reality that the very same people who give us rich wisdom can also talk what seems to us absolute nonsense (and vice versa) is an education in the human condition.  Including our own condition, which is likewise compounded of wisdom and nonsense.

...what people in the past were openly debating and conversing about is unlikely to be the most important think about them.  "There will be some fundamental assumptions which adherents to all the variant systems within the epoch unconsciously presuppose.  Such assumptions appear so obvious that people do not know what they are assuming because no other way of putting things has ever occurred to them." *  And those unarticulated ideas are the truly key ones in any culture or age -- including our own.

So there we have many people, all much more eloquent than I am, coming up with great reasons to read old books, while simultaneously acknowledging that yeah, Shakespeare wasn't perfect, and sometimes he said things we're not going to like.

* Ursula K. Le Guin, in Lavinia, a response to the Aeneid

Jean said…
I'm reading Curiosities of Literature, slowly, and indeed it's interesting stuff! I'll have to get Calamities too.
April 19, 2021 at 2:05 PM