The Woman Who Had Two Navels 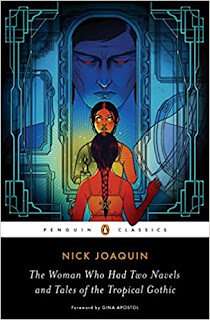 The Woman Who Had Two Navels and Tales of the Tropical Gothic, by Nick Joaquin

I really like this wonderful cover image, which illustrates one of the stories....

Nick Joaquin (1917 - 2004) is, as far as I can ascertain, a fairly major Filipino writer.  His full name was Nicomedes Joaquín y Márquez, and he also wrote as Quijano de Manila.  Although his first language was Spanish, he wrote his stories in English, and he wrote for 70 years.  These stories were written over time, with the earliest in the 30s and others in the 60s.

Joaquin started off wanting to be a priest, but decided that his calling was to be a writer.  These stories are suffused with Catholicism both cultural and faithful, but not conventional.  In fact none of Joaquin's characters could be described as conventional; they seem to exist in order to upend expectations.

The first stories are set in the days of Spanish colonialism, and are indeed Gothic in tone.  A girl meets her own granddaughter and decides that she must change her future (can she?); a rakish sailor is shipwrecked and experiences miracles.  A man has a vision of a ghostly New Year's mass at a church that no longer exists.  Later stories are set after World War II and the complete destruction of old Manila.  An arrogant young man starts seeing everyone without their clothes, then without their skin, and then down to their bones.  A writer gets off a plane and is thrown into an inexplicable adventure that eventually reveals an immortal leader of a cult.

They're great stories, beautifully written.  I didn't much care for the title story, but all the others I enjoyed a lot.  If you're looking for literature of the Phillippines this is a good choice, but not the only one!  Just as I was getting down to writing this post, Karen at Books and Chocolate reviewed America is in the Heart by Carlos Bulosan, which is going right on to my list.